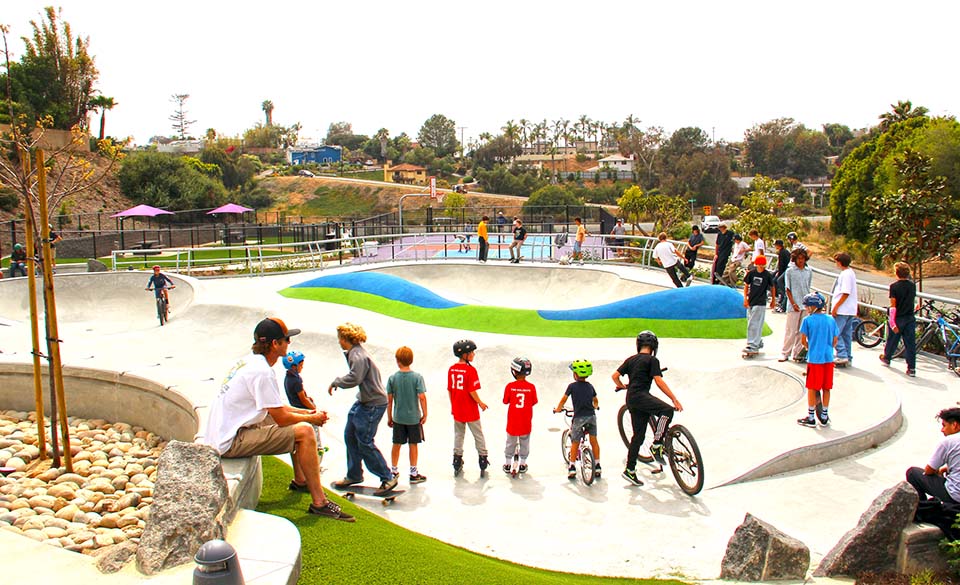 Elected officials are frequently criticized — it comes with the job. But our Encinitas City Council deserves our praise and appreciation. They have done something amazing for our community. Have you been to the new Olympus Park in Leucadia?

The day after it opened it was absolutely brimming with families enjoying the amazing variety of fun spaces. There is a basketball court, a skate feature, a zipline, innovative playground equipment, open spaces, a dog park (not yet open), and paths to walk, as well as covered picnic areas and lovely planted spaces.

This site was set aside for a park in 2001 as part of development plan. At the same time, the City was beginning the process of creating what is now the Encinitas Community Park, so financial constraints meant that development of the park in Leucadia was deferred.

Some dedicated citizens, particularly Kathleen Lees, helped ensure that the Council moved its focus to Olympus Park once the Community Park was funded. The newest park’s planning had heavy community input, led by the Parks staff and the Parks & Recreation Commission. The result is truly spectacular.

From the time the land was set aside until the park’s opening last week, there have been nine individuals serving on the City Council as well as an evolving staff and commission membership and many engaged citizens all contributing to this result. All deserve our appreciation. Local government moves slowly, but it does move, and it does take a village.

This council may be able to deliver yet another great amenity to our city. There is still one site dedicated to the city as “mitigation” but not yet developed, and that is the theater pad at Encinitas Town Center. I understand the City is very close to signing a deal with North Coast Repertory Theater to build a beautiful little facility there.

Despite what you might hear in political campaigns or on social media, this Council and the city staff are getting good things done for our community. I, for one, am grateful. I know firsthand how hard the job is.

Lisa Shaffer, former Deputy Mayor of Encinitas, is author of “Potholes, Parks, and Politics: A guide to getting things done locally (without having to run for office yourself”