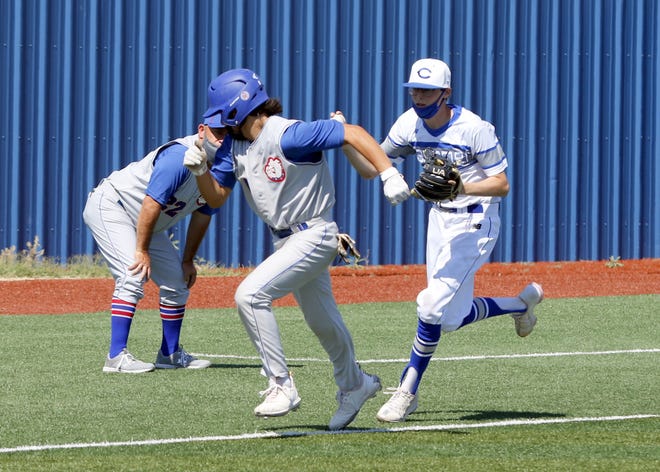 It had been 415 days since the Carlsbad Caveman baseball team played an actual game before Saturday’s doubleheader against the Las Cruces Bulldawgs. Previously Carlsbad had beaten another Bulldog team, the Artesia one, to capture the 2020 Caveman Classic Tournament before COVID-19 shut down the season.

Now in 2021 Carlsbad didn’t show any signs of rust with such a long layoff and swept Las Cruces, 8-1, 9-2 to start off the season and give Cavemen head coach Alan Edmonson plenty of reasons to know this team is heading in the right direction and has a chance at a postseason run.

“It was a team win,” Edmonson said. “Everybody pitched in and contributed. I think our pitching’s only going to get stronger as the season progresses. Right now we’re trying to take care of their arms and not use them too much. We want our guys to be at their strongest in late May and early June.”

In both games Carlsbad (2-0) jumped out to an early lead and never gave Las Cruces (2-4) a chance at a comeback. The Cavemen racked up 26 hits, seven going for extra bases, 17 RBIs and four walks.

“I was a little worried about was the offensive side because we couldn’t do live pitching all the time,” Edmonson said. “We did our best to replicate it in practice. We came out swinging, and swinging well. Offensively we played really, really well. Every guy did his job.”

Six batters in Carlsbad’s first game hit .500 or better. In the second game five batters hit .500 or better with Maddux Edmonson, Ashton Whiteaker and Kayden Bratcher hitting accomplishing the feat in both games.

“Maddox led us off. His job is to get on base. Of his six at-bats he reached base five times either by hit or walk,” Edmonson said. The only time he got out was on a sacrifice bunt where we asked him to get out so he did his job. Tristan (Thomas),Nolan, Kayden, Ashton and Mack, our power guys in the middle of the lineup, just started spraying balls all over the field. Ashton pieced everything up.

“Everything Nolan hit was strong including that two-run homer. That was exciting to see. Batters two through six I was really impressed with how they hit. We had singles, doubles, triples and home runs. You can’t ask for more than that.”

The five batters Edmonson mentioned were responsible for 19 of the 26 hits. Edmonson added he was especially impressed with the Carlsbad debut of Ashton Whiteaker who transferred from Mayfield this year. Whitaker went 5-for-8 with one triple and five RBIs. On the mound he pitched one scoreless inning to close out the first game of the doubleheader with one walk, one strikeout and stranded two batters.

Carlsbad now has a week off before its next games, a quick road trip doubleheader against a team from Las Cruces, this time the Oñate Knights on May 8 starting at noon. Edmonson plans to use the rest of the non-district schedule to fine-tune his lineup and give his non-starters more playing time.