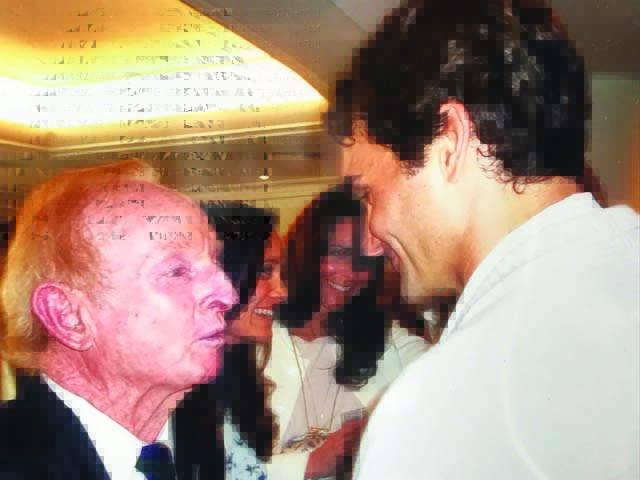 Tennis’ grandest event will crown a champion on Sunday, minus one of its greatest ones. Laver, who often sits with Great Britain’s blue bloods and its high-society members, is watching from his longtime Carlsbad home.

That’s not to say Laver didn’t receive applause and recognition this week.

He was the lefty with keen aim who drained a 20-foot birdie putt at San Marcos’ St. Mark Executive Golf Course, with its bar and grill patrons cheering his match-tying stroke.

Typical Laver, who swats down compliments and praise like he once did short lobs. The only person to win two Grand Slams is in numerous halls of fame and if there was one for being humble and gracious, he would be a first-ballot inductee in it, too.

Laver has the tire marks from a 23-year career that took its toll on his remarkable body. With two hip and one knee replacements, some quip that Laver is one limb shy of his third Grand Slam.

That he is by staying active weeks shy of his 83rd birthday.

There’s few North County golf courses Laver hasn’t played as it’s game-on most days for the Australian. He’s also a swell gardener, with bountiful tomatoes and lettuce crops that tempt the peacocks that roam his neighborhood by Leo Carrillo Ranch.

Those squawking birds are making nearly as much noise as Novak Djokovic, the world’s top-ranked player. The sizzling Serbian is halfway to joining Laver and Don Budge as the only men to win the Grand Slam.

Djokovic has banked this year’s Australian Open and French Open. If he wins Wimbledon, just the U.S. Open will separate Djokovic from tennis immortality.

Laver wonders if someone will match his greatness. It was in 1962, when Laver was an amateur, and in 1969, after the stuffy tennis organizers opened competitions to the professionals, that he won the four major titles.

What Laver didn’t collect was much dough for entertaining the masses consuming strawberries and cream.

“In 1962, I received a 5-pound voucher which I had to use on the Wimbledon grounds before leaving,” Laver said, with a chuckle.

“Well, I got a firm handshake from the Queen, too,” he added.

“I might have quit too soon,” said Laver, whose career included 12 majors singles championships and 200 overall titles and saw him ranked No. 1 from 1964 to 1970.

Don’t forget that Laver played for the San Diego Friars of World Team Tennis in 1976, and at age 38, was named the league’s rookie of the year.

Almost every year, Laver returns to Wimbledon where he’s treated with reverence. But with the world still turned upside down with COVID-19, Laver is cozy in Carlsbad.

Although Laver’s presence can’t be ignored when watching the fortnight’s forehands and overheads.

While it was more than 50 years ago that Laver claimed his second Grand Slam, his image fills TV screens in Rolex commercials that highlight tennis’ icons.

“Now if I could just get one of those watches,” he joked.

If Djokovic keeps on ticking at Wimbledon, he keeps his Grand Slam dream alive and Laver isn’t one to burst it.

“I’m just happy he’s competing well,” Laver said, “But no one is going to give it to him. You have to be playing your best tennis at the right time.”