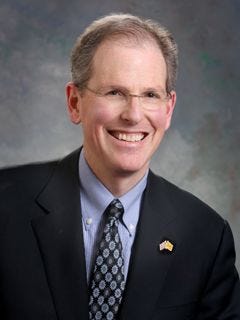 Air pollution controls adopted by The State of New Mexico could be made tougher than federal law as a bill advanced in the Senate Finance Committee Wednesday and could next face a vote on the Senate Floor.

Sponsored by Sen. Peter Wirth (D-25), Senate Bill 8 was intended to allow the State to adopt air pollution controls as stringent or tougher than federal restrictions through the New Mexico Environment Department and the Environmental Improvement Board.

If signed into law, SB 8 would amend both acts.

The bill would alter their language to require regulations be “at least” as stringent as federal law, instead of “no more than,” as the present language specifies.

The measure was granted a “do pass” recommendation from Finance Committee on a (6-4) vote after making it through the Senate Conservation and Judiciary committees during the 2021 Legislative Session.

If an area within the Environmental Improvement Board’s a local board’s jurisdiction is deemed to have ozone levels within 95 percent of the National Ambient Air Quality Standard (NAAQS) or 70 parts per billion (ppb), the bill would require the agency develop a plan to reduce such pollutants.

Areas deemed to be in a transportation-related pollution non-attainment area – areas that exceed limits placed on such pollution – could also see vehicle inspections implemented for emissions, per the bill.

No taxes would be imposed to fund the vehicles inspections, the bill read, without a public vote.

More:Bills transitioning New Mexico away from oil and gas advance in the Senate, House

During Wednesday’s hearing, Wirth said the bill would give the state and local communities the power to impose their own air quality standards without having to wait for the federal government.

“What this bill does is asserts the state’s primacy,” he said. “The federal Clean Air Act and Hazardous Waste Act gives states the right to put in place rules that are more stringent than the federal regulation.”

He said the bill would allow the State of New Mexico to use federal regulations as a “floor” and adopt stricter rules as needed.

“Right now, our rules for air quality and hazardous waste are tied to the federal rules. We cannot go higher. We cannot go lower,” he said. “The problem with that is you can have huge swings based on federal shifts.”

Charles De Saillan, an attorney with the New Mexico Environmental Law Center testified before the committee that the bill would allow for greater state and local control in protecting the environment.

If the U.S. Environmental Protection Agency were to repeal or weaken regulations, De Saillan said current law would force the state to also lower its requirements.

He pointed to numerous environmental rollbacks during the administration of former-President Donald Trump and said SB 8 would make New Mexico immune to the whims of politicized federal agencies.

Without the bill, New Mexico was unable to regulate Issues such as methane emissions from oil and gas facilities, De Saillan said, as the EPA recently rescinded its ability to do so.

“The limitations in these laws have presented state and local agencies with several problems,” he said. “The agencies have been forced to try to regulate methane emissions indirectly by regulating other pollutants. This is a very inefficient method of trying to adopt regulations.”

A threat to business?

Amy Barabe, lobbyist with the New Mexico Oil and Gas Association said the trade group which represents more than 1,000 oil and gas companies in New Mexico “strongly opposed” the bill.

She warned the bill would “upend” ongoing collaboration between the State of New Mexico and the industry in developing regulations on methane.

Barabe was joined in opposition by other trade groups, oil companies and the New Mexico Chamber of Commerce.

“It would give overly broad authority over air quality and hazardous waste to a board appointed by the executive, so subject to political changes every four years,” she said. “Because there are no meaningful parameters placed on the board in this bill, it creates great uncertainty for operators looking to continue to further their investments in New Mexico.”

Sen. Crystal Diamond (R-35), who voted against the bill, said if enacted the bill could dissuade businesses such as oil and gas companies from coming to New Mexico. She said federal regulations were adequate for regulatory consistency.

She also argued the bill would have a fiscal impact on companies which would then directly affect New Mexico’s bottom line, despite a Legislative Finance Committee report showing it there would be no fiscal impact from the bill.

“As a legislator, we continue to discuss how to better attract businesses. One way we know to do that is to create continuity and consistency within our business atmosphere,” she said. “What I worry is that this bill actually creates inconsistency and I fear that it threatens business growth.”