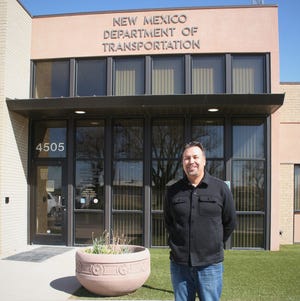 Francisco Sanchez was overwhelmed and honored when the New Mexico Department of Transportation (DOT) picked him to replace Tim Parker as District 2 Engineer for an office that covers nearly ten counties and hundreds of miles of asphalt.

Sanchez said Parker left DOT’s District 2 office in Roswell in December 2020 to take a job with the Texas Department of Transportation in San Antonio.

DOT promoted Sanchez to the top job earlier this month and has worked for DOT for nearly a decade, read a news release.

More:City and DOT agree on funding for major work on Mermod Street

“I’m up to the challenge and super excited to take the position NMDOT has such an impact on everyday lives and I’m just looking forward to improving roads in Southeast New Mexico,” he said.

“He sets a professional standard for not only the district but the entire department and brings a wealth of experience which will serve southeast New Mexico and NMDOT well,” he said in the news release.

Sanchez graduated from New Mexico State University with a bachelor’s degree in civil engineering in 1999.  He has more than 20 years of experience working for the U.S Army Corps of Engineer, City of Roswell, and DOT, the release cited.

Sanchez said his immediate plans for District 2 are to continue on with projects set up by Sandoval and Parker.

Work on two phases of U.S. 285 south of Carlsbad are set to be complete within one to two years, according to DOT.

“We plan our projects in a four-year cycle and me coming into this position a lot of the projects had been established and already into development and funding has been assigned to them. My focus is really on the future,” he said.

Sanchez added focus will be on the projects that are currently in the State Infrastructure Program and his role as District Engineer is look into the future for District 2.

He said Southeast New Mexico is a very unique dynamic with oil and gas production and agriculture. Burns added Sanchez has the knowledge to deal with multiple aspects that shape Eddy County.

“He likes to come down and do what’s right. We’re real pleased with Francisco being selected,” Burns said.

He said Sanchez is responsive to the needs of Eddy County.

“He’s always eager to want to come down and make sure it’s done and done right and to the benefit of whoever he’s dealing with. Francisco has always been a very good resource to call and have in your deck of resources,” he said.

Carlsbad Mayor Dale Janway said the City has had “an excellent working relationship with District 2 of DOT.”

Janyway thanked Parker for the work and time he put in during his tenure and looked forward to working with Sanchez.

“Francisco Sanchez has done an outstanding job when working with us in the past,” he said.

Sanchez’s relationships aren’t limited to the lowlands of District 2, according to Village of Ruidoso Mayor Lynn Crawford.

“We’ve had a lot with our engineer for this district for some time. Back with Tim Parker we developed a good relationship. We’ve had a lot of interaction with Francisco Sanchez,” he said.

Crawford said Sanchez has been responsive in the past if potholes needed repairing and pavement needed to be painted as United States Highway 70 and New Mexico State Road 48 run through midtown Ruidoso.

“We knew that they (DOT) were looking at several folks and I’ve worked with several of them personally. I wrote a letter of support for Francisco and said, ‘they had a good crop.’ But we had a good working relationship with Francisco. He turns in questions to his authority that we ask,” he said.