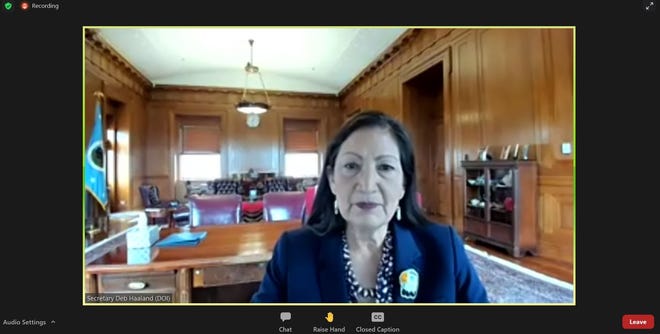 Tribal communities from New Mexico and across the nation labeled the federal government’s past oil and gas polices as “environmental racism” amid a lack of consultation with Indigenous groups in decisions that could be devastating to sacred lands.

The arguments came at the opening of a Thursday forum held by the U.S. Department of the Interior (DOI) on its ongoing review of the federal fossil fuel program amid a temporary halt of new oil and gas leases enacted via executive order by President Biden.

Environmental groups also expressed concerns alongside the Tribal groups during the forum for pollution brought on by fossil fuel development in both the northwest San Juan Basin and the southeast Permian Basin region.

Julia Bernal, director of the Pueblo Action Alliance based in Albuquerque said the federal government should prioritize a shift away from fossil fuels toward renewable energy to protect the environment and public health in the state.

“The extractive economy in New Mexico will only provide short-term revenue with long-term damage to our lands and waters, and the health of our communities,” she said. “The Department of Interior must create a roadmap to a just transition to renewable energy and it starts with undoing the inequitable and unhealthy federal oil and gas leasing program.”

The Greater Chaco Coalition, a collection of more than 200 indigenous community leaders and other groups, reported more than 90 percent of the Greater Chaco Region – an area of northwest New Mexico known for heavy oil and gas development alongside lands sacred to the Navajo Nation – was already leased to oil and gas and subjected to pollution.

Federal land management decision making, the coalition argued, should see increased involvement with Native American communities when their lands could be affected.

“Due to unchecked oil and gas, Indigenous peoples and Greater Chaco communities are saddled with countless public health and environmental justice impacts including some of the worst air quality in the nation and a hovering methane cloud the size of Delaware,” the coalition said in a statement.

“For justice in Greater Chaco and beyond, the federal oil and gas leasing program must be fundamentally reformed.”

Interior Secretary Deb Haaland, formerly U.S. representative for New Mexico’s First Congressional District and herself a Native American of the Laguna Pueblo, contended that while oil and gas was and will continue to be an important part of the U.S. economy, the federal government must reevaluate its system for allowing production on public land.

She said the previous administration under former-President Donald Trump, which pursued an “American energy dominance” agenda by increasing leasing and seeking to open more lands to drilling, ignored the impacts to public health and pollution.

“Fossil fuels will continue to play a major role in America for years to come, but too often, the extraction of resources has been rushed to meet the false urgency of political timetables, rather than with careful consideration of the impacts to the environment and future generations of Americans,” Haaland said in her opening comments.

“The potential impacts to people, water, wildlife, and climate were deliberately ignored – something the courts continue to address.”

The halt on new federal leases, Haaland said, will allow the Interior Department to reevaluate the impacts of fossil fuels.

She contended the oil and gas industry already held “thousands” of permits on 38 million acres of public land that were not affected by the halt.

“The pause in new oil and gas lease sales gives us space to look at the federal fossil fuel programs that haven’t been meaningfully examined or modernized in decades,” Haaland said. “I want to be clear that the pause on these lease sales does not impact permitting and development on valid existing leases.”

Laura Daniel-Davis, principal deputy assistant secretary of lands and minerals development at the DOI said the Department was tasked with managing and preserving natural resources for the future while also working to ensure federal land usage is more beneficial to the American public.

Federal oil and gas programs contribute to about a quarter of U.S. greenhouse gas emissions, she said, while the royalty rate for federal leases of 12.5 percent was created in 1920.

Daniel-Davis said the Department believed there were ways the program could be updated to be more beneficial.

An interim report was expected this summer, she said, including input from states, industry, and other stakeholder groups.

“Our principal charge is to manage our lands, waters and natural resources, not just across the fiscal years but across generations. We’re facing serious challenges on shore with fossil fuels’ contributions to climate change,” she said.

“We think there are many ways the fossil fuel program can better meet the needs of our people.”

As of Jan. 31, 2021, the Bureau of Land Management (BLM), which manages federal onshore oil and gas development, reported 7,607 applications to permit drilling (APDs) were approved and available for use while another 5,328 were awaiting approval.

Nada Culver, deputy director at the BLM said that while fossil fuels makes up a large portion of the $3.46 billion in revenue brought in by the agency in Fiscal Year 2020, the energy sector should not prioritized over all others.

“While energy development is one of the land uses, it is not elevated above other uses,” she said. “Currently, most lands that are not legally required to be closed to oil and gas are open to leasing.”

Frank Macchiarolo with the American Petroleum Institute argued the oil and gas industry has worked for years to develop methods to mitigate its impact on pollution and that any effort to reduce production in the U.S. would lead to increased reliance on foreign sources of fossil fuels developed with less environmental protections.

“Policies aimed at slowing or stopping oil and gas production also pose a threat to our national security. Energy demand is likely to continue to grow in the U.S. and it’s important that be produced here at home. We urge you to expedite this review.”

He said the industry has not “stockpiled” leases as was argued by critics, and that the API – which represents thousands of oil and gas companies in every segment of the industry – supported a price on carbon that would incentivize reductions in emissions.

Macchiarolo explained that after land is leased it can take years for a company to develop the land and determine if the lease will become productive.

“The industry is not stockpiling leases and permits. Non-producing leases are not inactive,” he said. “There’s no guarantee that all leases will be productive. The government receives large amounts of lease sale bonuses and rentals.”

Wendy Kirchoff with the American Production and Exploration Council, a trade group that represents both major and independent onshore oil and gas producers, said the industry works closely with the people of oil and gas regions.

She said many rural communities could be imperiled by federal policy restrictive of such operations.

“Our companies are highly conscientious about working with and listening to the communities and the people in the places where we operate,” Kirchoff said. “What we often hear from families and businesses in these communities near federal oil and gas development is they depend on the good-paying jobs and local commerce that development brings.

“People in these towns are concerned that without these projects, their communities would severely suffer.”