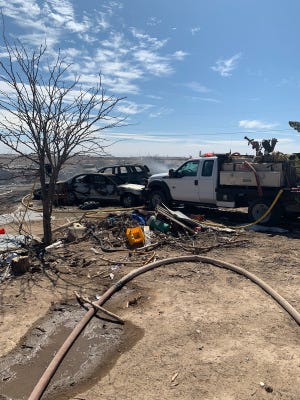 Mack said the initial indication was a grass fire burning on Show Low Trail. Once crews arrived there was a large pile of tires in flames.

He said crews had a hard time extinguishing the tire blaze, which spread on the property and damaged the cars and a camp trailer.

The fire was extinguished and firefighters were looking for hot spots and left the scene Wednesday around 2:40 p.m., Mack said.

He said the fire’s cause was still under investigation, and did not speculate as to whether the ignition was natural or arson.

Humidity levels were forecast around seven percent Wednesday and winds were forecast from the southwest to 20 to 30 mph with gusts up to 50 mph and temperatures 10 to 15 degrees above normal.

Greg Murdoch with the NWS said strong southwest winds in the upper levels of the atmosphere prompted the wind and warm temperatures Wednesday.

He said southeast New Mexico is getting into the fire season as warm, dry and windy weather was forecast for the next few weeks.

“It will last into the first part of May,” he said.

With the warmer and windy weather in Eddy County, Mack said this is a good time for property owners to clean up.

“And stay in compliance with county fire codes,” he said. “Weed edges around your property.”

NWS projected the warm weather hanging around through Friday with a chance of thunderstorms in Eddy County Friday night and highs in the 60’s on Saturday and Sunday.

Wednesday at 2:53 p.m. west winds of 18 mph gusting to 28 mph were reported at the Cavern City Air Terminal south of Carlsbad, NWS said.

Relative humidity at the airport was nine percent as of Wednesday afternoon, the Weather Service indicated.