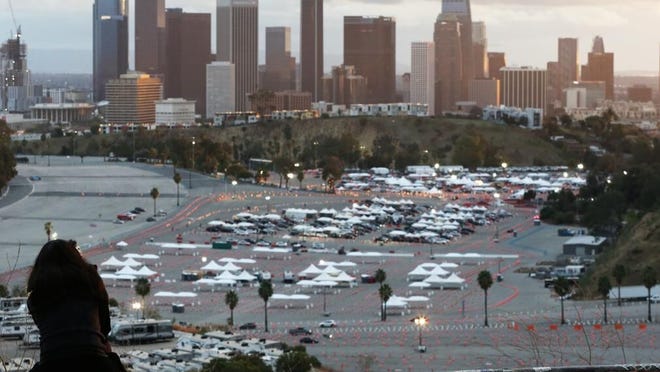 The groups called for an end to oil and gas permitting as the state established new rules aimed at limiting emissions of methane and other air pollutants from extraction operations.

Ground-level ozone, a cancer-causing air pollutant, is created when volatile organic compounds (VOCs) which are frequently emitted by oil and gas facilities, interact with sunlight.

The Carlsbad and Hobbs areas – both known for heavy fossil fuel activities – where found by NMED to have some of the highest ozone levels in the state, both in exceedance of federal standards.

As part of NMED’s rulemaking process, the State’s Environmental Improvement Board announced it would host a meeting on Sept. 20 on the ozone regulations, and the New Mexico environmental activists argued no new oil and gas permits that allow such emissions should be allowed until the rules are in place.

“In the interim, we write to request that, in the interest of public health, environmental justice, and safety, you direct your administration to pause the approval of new air pollution permits that would increase or otherwise contribute to New Mexico’s serious ozone problem,” read the July 15 letter.

“Specifically, we request you direct the Environment Department to pause the approval of permits for new or modified oil and gas facilities where emissions of ozone forming pollution would increase.”

The letter was signed by 14 environmental group including state-wide organizations like the Santa Fe-based WildEarth Guardians and local advocates like Carlsbad-based Citizens Caring for the Future.

The groups pointed to elevated ozone levels in rural areas such where extraction occurs, such as in Permian Basin to the southeast and the San Juan Basin to the northwest.

Urban areas are typically where ozone is highest, the letter read, due to denser car traffic and other human activities.

But the increases in more remote areas, the letter argued, meant extraction was also to blame.

“While ozone is normally a big city problem, air quality monitors throughout New Mexico have recorded elevated ozone levels in large part due to unchecked air pollution from oil and gas extraction,” read the letter. “Because ozone affects entire regions, this high ozone pollution is harming virtually the entire population of New Mexico.”

More:Oil prices, drilling rig and mergers up in Permian Basin amid market recovery from COVID-19

Records from the federal Environmental Protection Agency showed exceedances of the National Ambient Air Quality Standard (NAAQS) were widespread in New Mexico this year, with many days in Carlsbad and other extraction areas higher than the maximum 70 parts per billion (ppb).

Carlsbad recorded seven days of ozone in excess of NAAQS this year, records show, more than major cities Albuquerque and Las Cruces. Farmington in the San Juan Basin had one day in excess of the NAAQS, per the EPA data.

“It is telling that this region is where the most intensive oil and gas extraction activity is occurring in the state,” the letter read. “New Mexico clearly needs relief from this dangerous air pollution while new rules are under consideration to control emissions.”

On the federal level the Biden administration came under fire last week for its continued issuance of drilling permits under the Department of Interior and agencies like the Bureau of Land Management.

Records show more than 2,000 such permits were approved since Biden took office in January, with more than half going to New Mexico.

More than half of New Mexico’s oil and gas production occurs on federal land and many worried the state could be the most impacted by federal policy after the Biden administration suspended new federal oil and gas leases nationwide as the DOI conducts a review of its fossil fuel program.

More:New Mexico hopes for oil and gas windfall as nation recovers from COVID-19

“A federal leasing moratorium is effectively a blockade around New Mexico’s economy, impacting our state more than any other in the country,” read a statement from trade group New Mexico Oil and Gas Association upon the moratorium enactment.

If the ban became permanent, a NMOGA analysis warned of a loss of 62,000 jobs statewide by next year, and Lujan Grisham signaled she would seek a waiver from the federal government of such a move based on the state’s efforts to mitigate climate change through rulemakings at the NMED and EMNRD.

But Taylor McKinnon with the Center for Biological Diversity said Biden vowed to fight pollution from fossil fuels on the campaign trail and the continued issuance of permits ran counter to that promise.

“Our planet, livelihoods and life support systems are in grave danger. We’re out of time,” McKinnon said. “We can’t fight the climate crisis while continuing to expand fossil fuel extraction. President Biden promised to end federal leasing and drilling for good reason. We have to hold him to his promise.”

During a July 14 meeting of the Environmental Council of State, Lujan Grisham touted New Mexico’s climate change efforts even as the state saw record levels of oil production, surpassing North Dakota in March for the first time in about a decade.

Lujan Grisham pointed to legislation to create a clean fuel standard for cars and trucks while also work at the state level to diversity its economy away from reliance on oil and gas.

Oil and gas advocates were critical of Lujan Grisham’s remarks, citing rising unemployment in the state, and contending efforts to encourage renewable energy would lead to higher power costs.

“The Governor’s green agenda is causing eclectic rates to go up faster than the national average at a time when New Mexico’s unemployment rate is among the highest in the country,” said Larry Behrens, Santa Fe-based western states director with Power the Future.

“New Mexico’s working families are being forced to pay for the Governor’s failed green agenda and no state should follow such an example.”