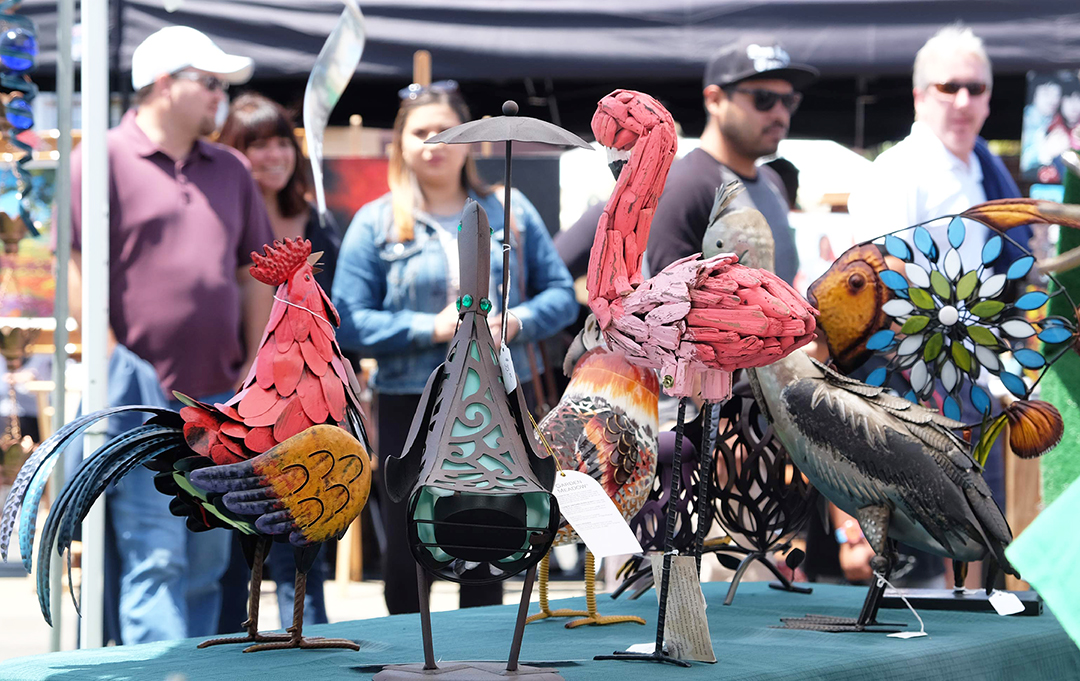 CARLSBAD —One of the city’s biggest events makes its return to the spotlight on July 25.

The Carlsbad Village Faire, which draws tens of thousands of residents and visitors, showcases hundreds of vendors along Grand Avenue west of Carlsbad Boulevard.

Bret Schanzenbach, CEO of the Carlsbad Chamber of Commerce, said this year’s event will be scaled down and won’t include some of the usual attractions due to safety precautions due to COVID-19.

“We want to be cautious, but have a great experience,” Schanzenbach said. “We made the decision back in January to postpone to July 25 with the hopes of doing what we are doing.”

Schanzenbach said 550 vendors will be on display, which is down by approximately 300 from a normal year. While there will not be any live entertainment, beer gardens or kid’s zone, Schanzenbach said he hopes those features can return for the Village Faire’s November event.

The last Village Faire was in November 2019 and for Rick Bauer, of Kennedy Faires, this marks one of the first events in 16 months and his staff is finally returning to work.

Bauer said there is excitement in the air, although event planners are being careful to implement certain precautions in compliance with health orders, including maintaining plenty of space for people to move around.

There will still be a food court, said Schanzenbach, who is thrilled the event can return. Schanzenbach said this is a test run with hopes of a positive experience.

According to Schanzenbach, during their planning sessions in January, the thought was to have at least 200 vendors. As the vaccine has rolled out and cases started to drop, the County of San Diego began reopening, which led the Chamber to be able to host the event.

As for Bauer, he said he’s thrilled for the “micro-entrepreneurs” who have a chance to showcase their offerings at the open-air festival.

“People are so anxious to come out and show their products and services,” he said. “Some of them have almost lost their businesses to the point where they were ready to pack it up. This is just a huge event to showcase … and everyone is so excited.”

Also, the city will close off a number of streets in the area. Those include Grand Avenue west of Carlsbad Boulevard, parts of Washington, State, Roosevelt and Madison streets and all alleys between those streets.

Additionally, parking is limited, and a free shuttle service is available at The Shoppes at Carlsbad mall and Poinsettia Coaster Station. The shuttles run every 20-30 minutes.