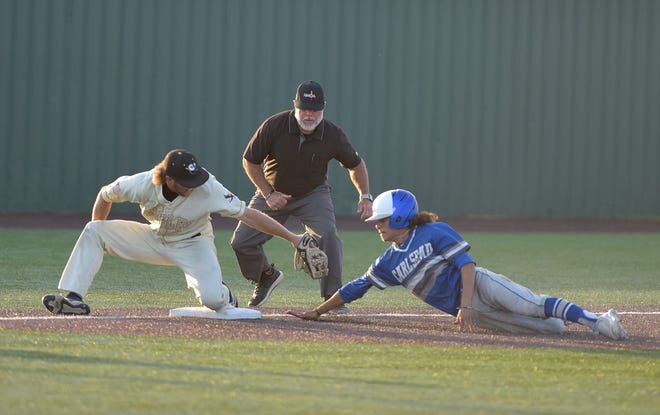 HOBBS – After the Hobbs baseball team edged Carlsbad 4-2 in Tuesday night’s state 5A quarterfinal, the public address speakers at a jam-packed Veterans Memorial Complex blared the Queen classic “Another One Bites the Dust”.

The Eagles just need two more to bite the dust and they’ll be state champions.

The next potential dust-biter for second-seeded Hobbs is third-seeded Sandia, thanks to the latter beating sixth-seeded Rio Grande 8-7 on Tuesday. The Eagles will host Sandia on Thursday at 6 p.m.

Hobbs is one-third of the way to a state title because of a complete-game, seven-strikeout effort from pitcher Colton Graham, and timely hits from the Eagles’ offense, which was actually outhit 7-5 by Carlsbad’s.

Hobbs’ quarterfinal win over the Cavemen came after the Eagles won the regular-season series 3-1.

“Very excited,” Hobbs head coach Marco Boyle said. “To be able to beat a team four out of five games, gotta love it. That’s a feat in itself right there. But I’m very proud of our team. Colton I know was itching to pitch last Friday, but now he realizes why (he couldn’t); we had to save him for this game, it was a big game. And I believed he was going to come through for us, and he did.”

“I think we shocked a lot of people tonight,” Graham said. “And I think we’re going to go out there in the semifinals and do what we did tonight.”

“We just couldn’t catch a break in any aspect of the game tonight,” Carlsbad head coach Alan Edmonson said. “That’s kind of been our season. For some reason, the calls don’t go our way, the ball doesn’t bounce our way. At some point, you’ve got nothing to say about it.”

Edmonson’s Eagles had a promising start against Graham in the top of the first inning, getting runners on first and second base with one out. Graham, though, induced a popout and rang up a strikeout to end the threat.

The Eagles jumped ahead 2-0 in the bottom of the first inning, despite a good start for Carlsbad pitcher Nolan Perry. Through the first three Hobbs batters, Perry had allowed just an infield single by leadoff hitter Hunter Wright, before striking out Graham and Eryk McNabb.

But Brevin McCool then singled to left, and J.D. Parada singled to center, scoring Wright to make it 1-0. After Caleb Salmon was hit by a pitch to load the bases, Bernie Socarras-Puig drew a walk that forced McCool home with the Eagles’ second run.

Perry then struck out Zak McPeters to end the inning.

It remained 2-0 until the top of the third, after a single by Brandon Ganaway and an RBI double by Tristen Thomas, slicing the Eagles’ lead to just a run. Thomas brought the tying run to third by stealing the base, but Graham struck out Ashton Whiteaker to finish off Carlsbad’s half of the inning.

Hobbs went back up by two in the bottom of the third. McNabb led it off by getting plunked, and an out later, Parada sliced a 3-2 pitch to left for a single, sending McNabb to third base.

And with Salmon up, a wild pitch allowed McNabb to come home, stretching the Eagles’ lead to 3-1.

An RBI double by Mack Mabrey in the top of the sixth inning brought Perry home to again bring Carlsbad within a run, this time 3-2.

In the bottom of the sixth, however, the Eagles added some insurance when Caleb Salmon belted a leadoff triple, and wound up scoring on a passed ball, making it 4-2.

Graham found some trouble in the top of the seventh, when he walked Ty Molina to lead it off, but got outs on the next three at-bats to close out a 99-pitch complete game. The Eagles were moving on to Thursday’s semifinal, where they will probably have another standing-room-only crowd rooting for them.

“Oh, it’s awesome, man,” Graham said. “Our home crowd’s amazing; we have good fans and a good support group behind us, so it’s going to be awesome.”

Sandia, though, will likely be a tough obstacle.

“I don’t know too much about them,” Boyle said. “I know they’ve got a couple of good pitchers; one of them they burned today, and they went extra innings. We’ve just got to worry about what we need to do to win, and hopefully that’ll be enough.”

While Hobbs worries about that, Carlsbad’s concerns now lie in 2022. The Cavemen will face it with a much more battle-tested group than the one that entered this season.

“We came in with very little experience; I’d guess to say probably the least experience in 5A baseball, with a COVID year,” Edmonson said. “When we came into the season we only had 40 total varsity at-bats on the entire roster. We’ve got kids out here playing that made a jump; they’re only high school experience was C-team baseball and now they’re playing varsity baseball. So we were super young and inexperienced, and that caught us at times; other times they looked stellar. The future is bright, and we’re looking forward to it with this group of kids we have.”