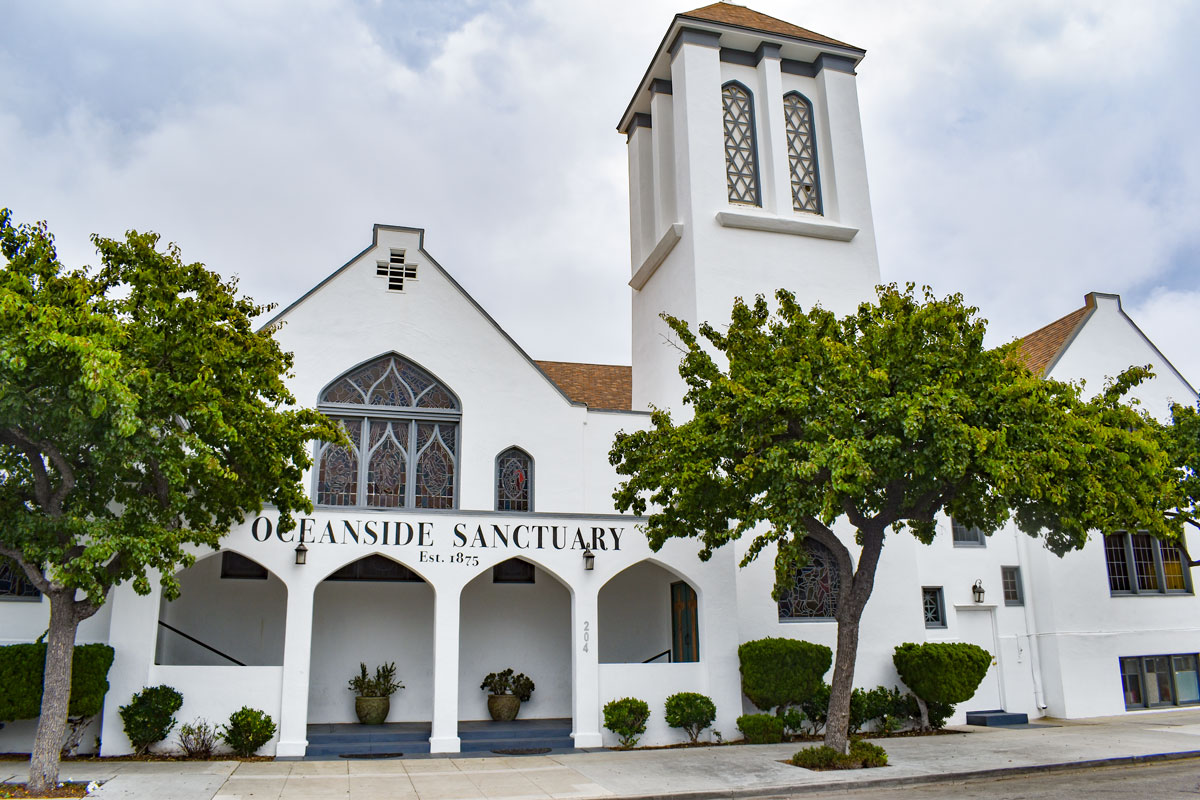 OCEANSIDE — Historically, the Christian church has been a source of trauma for many LGBTQ+ people, but one 146-year-old downtown church is striving to make its sanctuary a welcoming, safe space for its first-ever “Pride Sunday” sermon.

For several years now the historic Oceanside Sanctuary has been open and affirming of LGBTQ+ individuals, but this year is the first time they prioritized celebrating Pride Month.

The church is celebrating “Pride Sunday” on June 27, a service that will include guest speaker Max Disposti, founder and executive director of North County LGBTQ Resource Center, and local singer and recording artist Celeste Barbier.

In his sermon on Sunday, Rev. Jason Coker will share a message from Acts 10 in the Holy Bible’s New Testament. Coker said his sermon is about how the spirit of God often leads followers in ways that “break with tradition and make us uncomfortable.”

“It’s not our job to judge who God includes, it’s God’s decision who gets included in the kingdom of God,” Coker said. “To us, it’s very obvious that the spirit of God is including LGBTQ+ people.”

Recently, the church hired Joey Pearson, a gay Oceanside resident, as its new music minister. Pearson will be leading music on Pride Sunday and interviewing Disposti during the sermon.

“The order of service is going to be absolutely wonderful,” Pearson said.

Still, Pearson warned, Pride Sunday is also going to be challenging for some of its attendees. Pearson and the church have been reaching out to LGBTQ+ community members through the LGBTQ+ Resource Center and other local groups.

While he is encouraging attendance, Pearson understands that in the past, Christian churches have harmed and traumatized LGBTQ+ people due to their sexualities or gender identities.

“I personally know a number of people for whom the church has been traumatic,” Pearson said. “Coming into this sanctuary is going to be harder for them than any of us could know.”

Pearson has his own past negative experiences with Christian churches. When he was a teenager, he was cornered in private by an elder at his former church in Encinitas and asked inappropriate questions about his sexuality.

“I was underage, I was a child, and my parents were not involved,” he said about the incident. “The church did not want me — if I was gay and out — to be involved in music ministry.”

Music has been an important part of Pearson’s life. Besides growing up involved in music ministry, he also competed in the television show “Star Search” as a young child and became a professional singer before he switched to focus on academia when he turned 18.

According to Pearson, churches regardless of how conservative or progressive, they are usually don’t have an issue with gay people in music ministry, but there is one caveat.

“The difference is conservative churches need gay people in music ministry to be closeted and not talk about their gayness, but they do not want to go without gay people’s talent,” Pearson said. “Gay people are fabulous and are particularly great people to have in music ministries.”

Pearson never left his faith but he did leave his childhood church, eventually returning to music ministry years later. Now, he holds the title of Oceanside Sanctuary’s first openly gay Minister of Music.

“This is a historic moment for this congregation that is over 100 years old, for me as an LGBTQ+ person who’s been rejected and separated from the church, and for our community who has not found a safe place within the church,” he said.

Both Pearson and Coker want everyone to feel safe and welcomed during the sermon.

“It’s on us to make this a safe space,” Coker said.

According to Coker, the church’s congregation felt that it was particularly important this year to champion the LGBTQ+ community and combat bigotry in all forms. He said that in the last several years, bigotry has not only been tolerated but advanced in many churches throughout the nation.

“For us, realizing that it had become a bigger issue we needed to take a louder stand against bigotry of all kinds,” Coker said.

Besides affirming the LGBTQ+ community, the Oceanside Sanctuary also focuses much of its energy on anti-racism efforts and empowering women.

Despite its age and traditional appearance, the Oceanside Sanctuary has its own long history of progressivism. The church had its first woman pastor during the Great Depression, who started a soup kitchen program at the time to help feed starving community members.

“We can kind of lean on that history and say this is a church that has always taken risks,” Coker said. “We think this is what the spirit of God is doing so let’s do it.”