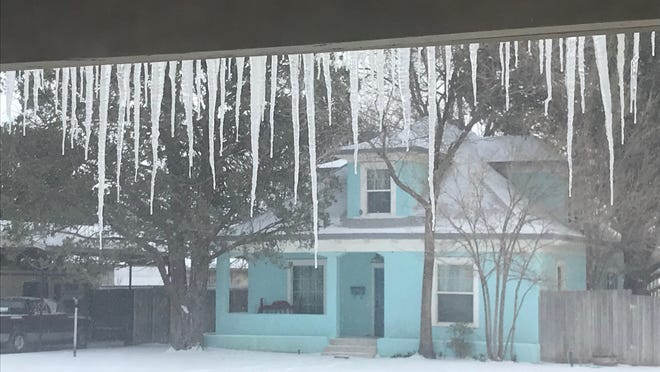 The Carlsbad Current-Argus is providing this content free to our community as a public service. Please consider a subscription to support this and other journalism.

The National Weather Service’s Midland/Odessa station predicts 2 to 3 inches of snowfall in Eddy County on Thursday.

Carlsbad Schools announced a complete closure of all classes for Feb. 18 due to inclement weather.

Loving Schools  will not be holding in-person classes today due to the weather conditions. Loving schools alerted students that online lessons were still available for students to complete as needed.

Artesia Public Schools are closed Feb. 18 due to inclement weather. John Ross Null, superintendent said there would be no online classes.

This information will be updated throughout the day.

Eddy County Administrative offices are on a 2-hour delay.

Scott Kleebauer, meteorologist with the National Weather Service (NWS), in Midland, Texas said the snowfall started in the Guadalupe Mountains and moved into the Carlsbad area between 1 and 4 a.m.

He said two to four inches of snow fell in the Carlsbad area as of 10:30 a.m. Thursday and the Queen area west of Carlsbad reported five inches of snow.

A winter weather advisory was posted for Eddy County until 2 p.m. Thursday. Kleebauer said NWS might let it expire.

“Roads were passable,” he said during a work commute from Roswell to Artesia.

Tucker said his home in Roswell received more than three inches from a storm earlier this week.

“No new accumulations today,” he said.

“No precipitation is in the forecast after this one,” he said of the departing snow.

Thursday’s high was forecast at 31 degrees Fahrenheit, read the NWS forecast for Carlsbad.

“Relief is on the horizon,” Kleebauer said.

Eddy County experienced planned power outages throughout this week as Xcel Energy and other providers conserved power to protect the regional electric grid and maintain reliability.

“For the present time there are no energy emergency alerts that are active,” he said.

“Our regional system is meeting the demand but is going to remain in conservative operations. We would like customers to continue conserving the best they can for the next couple of days,” he said.

Reeves said conservative operations means SPP will not idle any of the plants to perform maintenance that isn’t critical right now, and they won’t take any transmission lines out of service for routine maintenance either.

Crews out during snowfall

“Crew are working round the clock plowing and salting as needed,” she said. “Some roads like New Mexico (State Road)128 west of Jal is reported as difficult driving conditions.  Motorists are asked to reduce speed and proceed with caution.”

Spokesperson Dusty Francisco an accident was reported Wednesday at 1:46 p.m. on U.S. 285 near Carlsbad.

State police responded to another accident on U.S. 285 Thursday morning at mile marker 39. Francisco said there was one injury.

Another accident was reported on United States Highway 380 in Chaves County, Francisco said.

“Streets are slushy and a little slick,” he said of Carlsbad streets around 12 p.m.

“If you do not have to drive stay home. The roads are absolutely terrible and not getting any better. We are out in force but still spread extremely thin. Many roads are snow-packed with ice underneath,” Eddy County Sheriff Mark Cage said in a Facebook post.