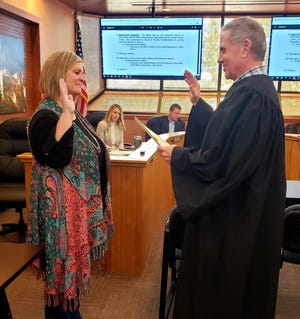 The Eddy County Board of County Commissioners appointed Darlene Rosprim to serve the remainder of Robin Van Natta’s term as Eddy County Clerk.

Van Natta, 54, died March 16 at Carlsbad Medical Center of an undisclosed illness. She was elected to a second term as Eddy County Clerk on Nov. 3, 2020. She had no opposition in last year’s general election.

Rosprim is no stranger to the Clerk’s office having spent nearly 25 years there, serving eight years as County Clerk.

She oversaw day-to-day operations in the Clerk’s office after Van Natta’s death, according to Strong.

“My plans are to complete her term. We are certainly missing her, but the staff is great, and the office is running smoothly,” Rosprim said.

Rosprim had not yet appointed a Chief Deputy Clerk at the time this article was published.

Crockett served two consecutive four year terms on the Commission and worked with Rosprim during her early years in office. Crockett couldn’t seek another term in 2020 due to term limits.

“She is outstanding, she has the residents of Eddy County best interest at heart.  She is also a great employee advocate.  I am happy the BOCC chose Darlene to finish Robin’s term and I am thrilled she accepted,” she said.

“The Commissioners agreed that Ms. Rosprim is unparalleled in her qualifications for the role, and the passion and dedication she exhibits for the position and the office is exceptional,” he said.

Davis added he and commissioners are grateful to Rosprim’s acceptance of the appointment to step in as Van Natta’s replacement.

“Having Ms. Rosprim as the County Clerk provides the citizens of the County the highest level of service and capabilities to meet their needs,” he said.