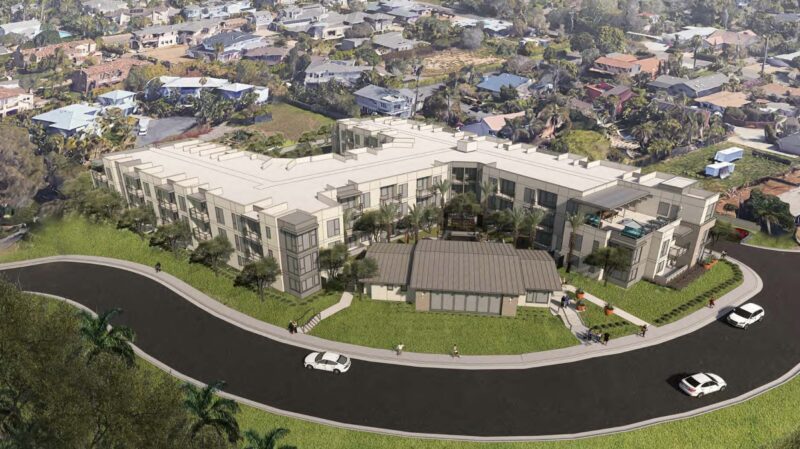 Driving home from over-built Huntington Beach I’m grateful for the visual breath of fresh air that means I am in Leucadia: gateway to Encinitas.  But our community’s aesthetic character could change forever depending on the Encinitas City Council’s decision concerning the 72 apartments proposed at 1967 Vulcan: the first “by-right” project under consideration.

New California State legislation allows developers to do pretty much whatever they want when a property is designated “by-right” to the detriment of existing neighborhoods. The 15% of affordable units currently required is a glorious gift to developers enabling them to waive basic regulations such as property line set-backs and adequate parking. Any citizen or city council that challenges this law does so at their own risk and expense.

Austin Wermers, developer of 1967 Vulcan, is appealing to the City Council after the Encinitas Planning Commission rejected his current design based on Section 4.1-15 of the Encinitas Housing Element, which requires that development of this very property (AD8) be mitigated by: “Appropriate landscaping, setbacks, height, transparency, building articulation, and other design features,” and compliance with the General Plan and Municipal Code.

On June 17, the Planning Commission concluded that while there was little they could do about the state waivers allowing this vast monolithic apartment building to reach three stories (code has always been two stories in Encinitas) and sprawl outwards, they could regulate design to make it more attractive than the “Hilton hotel” look that lacks all the elements mentioned above.

Instead of agreeing to improve the design (the usual back and forth which improves the look of our buildings) Wermers is appealing to the City Council.

We certainly need more affordable housing. 1967 Vulcan offers slightly more than mandated, but on June 17 the 12 affordable units were described by Commissioner Doyle as “mean.” (Though not as mean as those in the designs of the upcoming by-right Goodson project on Encinitas Boulevard whose “junior studios” require walking through a closet to reach a bedroom 6 feet from the kitchen stove.)

Affordable housing is simply not a priority for by-right developers who are taking advantage of the construction loopholes in a law (which arguably they played a large part in writing) to create vast poorly designed projects with the potential to wreck the visual appeal of our community.

Do 12 “mean” units make it worth abandoning our own regulations and bringing this visual blight that will destroy community character forever?

Another problem from this plan is more traffic and public safety. The impact of traffic and unsafe conditions from the 72 apartments proposed at Vulcan was allegedly addressed by a traffic study done in off-peak February 2020 — when traffic was being diverted off La Costa and before the new 130-unit hotel was opened.

The study concluded that the development wouldn’t make the bad traffic situation much worse, despite the current “F” (failing) grade. Shouldn’t development improve conditions, not worsen them? Locals want this traffic study redone.

Please Encinitas, we can and must do better. Ask the City Council to support the Planning Commission’s decision and uphold the City’s own development requirements which they went to much trouble and expense (ours) to develop. Email the Encinitas City Council at [email protected]

City Council, please listen to your residents and the Planning Commission. Demand a new traffic study and a new attractive design. This is a battle that is worth fighting even if it means challenging State law.

The future of our community is in your hands. Leucadia may no longer be funky but it doesn’t have to become Huntington Beach.

Nicole Ranson is a Leucadia resident.