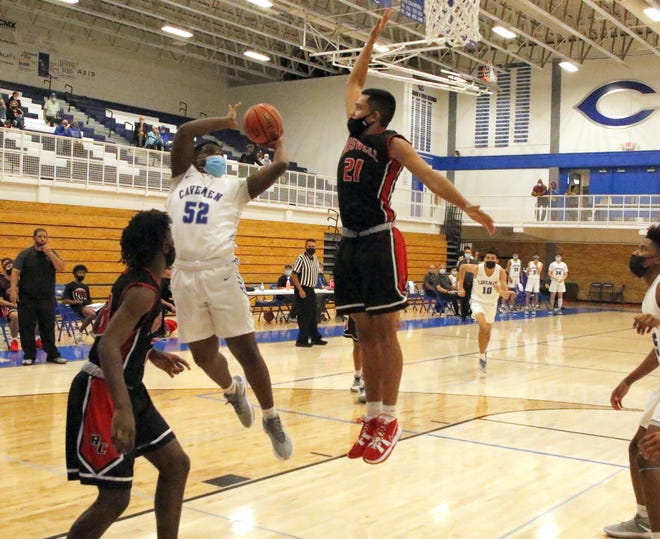 Caveman head coach John Zumbrun is still waiting to see what his complete roster is capable of while Carlsbad hopes to end its winless district run next game. Facing the No. 2 ranked Roswell Coyotes on Friday night a depleted Caveman team had the chance to upset Roswell but fell to the Coyotes in overtime, 63-60.

Still missing four players who are currently under COVID-19 quarantine, Zumbrun looked to his underclassmen in the hopes that this young squad could hand Roswell its second loss of the season. The sophomores responded by scoring 41 of Carlsbad’s 60 points in the game.

After falling behind quickly in the first quarter, 9-0, Carlsbad (3-3) retook the lead at the end of the first quarter with a buzzer-beating 3-pointer by sophomore RJ Amos and continued to hold the lead heading into the fourth quarter. Carlsbad led by double digits but Roswell (7-1) cut the lead to four points. 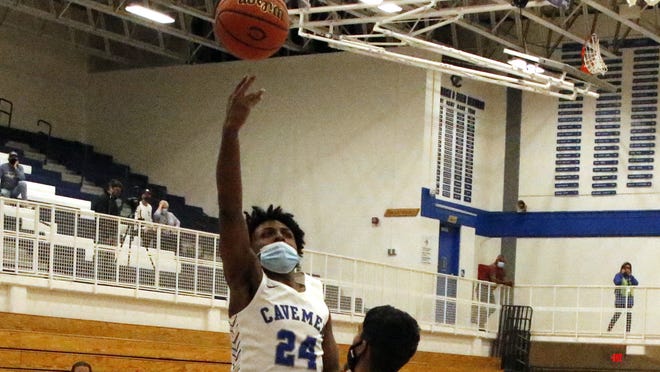 Carlsbad had a chance to end the game in regulation with an isolation play to senior Andrew Miller, but the shot was off the mark. In overtime, Roswell was simply too much for Carlsbad to handle after sophomore center Tylen Gonzales fouled out and replacement sophomore center DJ Moore had four fouls.

One again the Cavemen had a chance for the win in the final seconds trailing by one point, but Miller’s drive to the hoop was through a crowd and he stepped out of bounds with a few seconds left, allowing Roswell to inbound the ball and make both free throws to ice the game.

“I’m proud of the kids. Roswell’s the favorite to win the district and a Top-5 team in the state of New Mexico. It’s a real senior-led squad. I thought our kids battled. We’re dealing with adversity and had to face Roswell without some pieces. I’m really proud of kids for battling. In our mind we should have won. Roswell got a couple of offensive rebounds and we were a couple of plays late. But I’m proud because we started four sophomores.”

Carlsbad travels to Hobbs to face the Eagles Tuesday at 7 p.m. The Cavemen return to The Cave April 23 against Clovis.