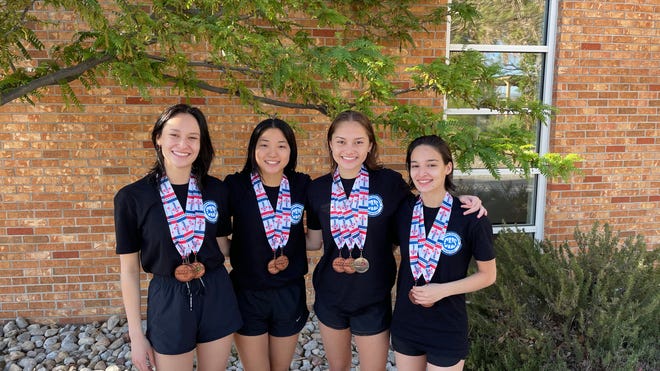 ALBUQUERQUE—The Carlsbad Cavegirls could have easily fallen apart even before the 2021 NMAA State Swimming & Diving Championships started when they found out one of their relay swimmers had to be quarantined for a possible COVID-19 outbreak, leaving only four active swimmers.

The foursome of Isabella Corder, Zöe Char, Sophia Corder and Emily Dostal met the challenge head on and finished in the Top-6 for all six races and ended up with 119 points to finish in eighth place out of 25 teams.

Less than 24 hours before the Cavegirls left Carlsbad for the championship meet Cavegirls head coach Moranda Madero informed her team that Colette Dhenin may have come in contact with a COVID-19 positive person and wouldn’t be allowed to compete. Dhenin was the anchor in both the 200 medley and 200 freestyle relays and was qualified for the 200 and 100 individual freestyle races. 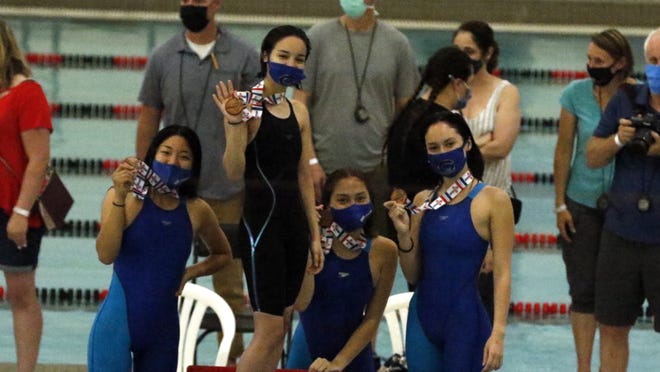 Confident in the depth of her team, Madero decided Emily Dostol, Carlsbad’s swimming alternate, would anchor both relay races. Dostol didn’t have any time to prepare but her efforts gave the Cavegirls a third-place finish in the medley relay, the first race of the day. The confidence was now there and the senior finished strong in Carlsbad’s other relay race, coming in sixth place.

“I was so nervous and I was just freaking out all night. I barely slept,” Dostol said. “Me also being a senior I know this is my last chance to go fast so I was just trying.”

Dostol didn’t look nervous on the blocks and certainly didn’t falter in the water.

“Emily pulled it out for us. She really did,” Madero said. “To find out the night before she carried the team. She really did. That’s what I told the team (after the announcement). That we’d still get a medal and we’d get a Top-3 finish. Don’t worry because we can do it.”

Fellow seniors Isabella Corder and Zöe Char along with sophomore Sophia Corder were the three carryovers from last year’s medley relay team which finished in ninth place with a time of 1:56.92. This year’s squad finished with a time of 1:54.77 32.

“I never imagined this,” Char said. “I’m glad that we got here even with this season as hard as its been it’s more than I can ask for.”

Last year Char’s portion of the medley relay race took 34.34 seconds. She cut more than two seconds off that with a time of 32.13.

The Corder sisters participated in two additional individual races. Isabella took fifth-place in the 200 freestyle and finished her high school career with a third-place finish in the 100 backstroke where she set a new personal best of 58.69.

“It was a really tough journey,” Isabella Corder said. “From where the team was started five years ago it’s honestly insane. I could have never dreamed of us placing third. It’s insane and to have this group of people who have been so supportive and Emily stepping in…it’s really great.”

Sophia Corder took fifth place in the 200 individual medley and a second-place finish in the 100 butterfly.

Madero was thrilled at the results.

“They’ve been working so hard. To watch it unfold is awesome. It’s so emotional,” she said. “Their friendship and sisterhood is just awesome to watch. It’s so fun. With all the bumps and bruises in the road we did it. They deserve every single medal they have on their necks.”

Following the swim meet the Cavegirls said they dedicated this meet to Dostol and look forward to her competing next season.