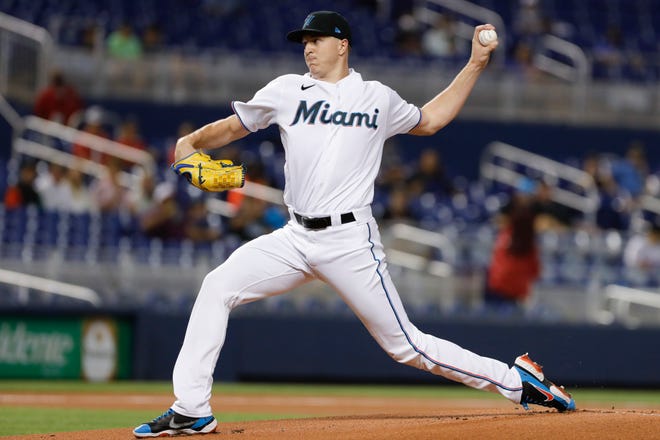 Trevor Rogers and the Miami Marlins plans to use the All-Star break as a resting period may have to change with the July 4 announcement that Rogers was invited to Coors Field as an MLB All-Star.

The Marlins left-hander was the team’s lone selection for the 2021 All-Star Game which will be played in Denver on July 13. Miami had concluded its three-game series against Atlanta and were ready to return to Florida when the news of the All-Star selection broke.

More:Trevor Rogers named NL Rookie of the Month for April and May

Rogers knew he was getting big news when he was called into manager Don Mattingly’s office, he just didn’t know what the news would be.

“I went into Donny’s office with the pitching coach,” Rogers said. “They sat me down and said congratulations you’re going to Colorado. I was shocked at that point but excited.”

Rogers (7-5) started out the season 6-1 winning the NL Rookie of the Month in both April and May. Rogers eclipsed the 100-strikeout barrier on the season during his June 23 game against Toronto. Rogers currently has the eighth-best ERA at 2.15.

“A lot of good things have happened this season,” Rogers said. “I’m fortunate to earn those Rookie of the Months and continuing to improve each and every time I’m out there. I just need to improve for the second half.”

Rogers plans to head to Denver but did note there’s a chance he may sit the All-Star Game out if his team decides he needs the rest before the second half of the season.

“We’re going to sit down and really figure out what’s the plan,” Rogers said.