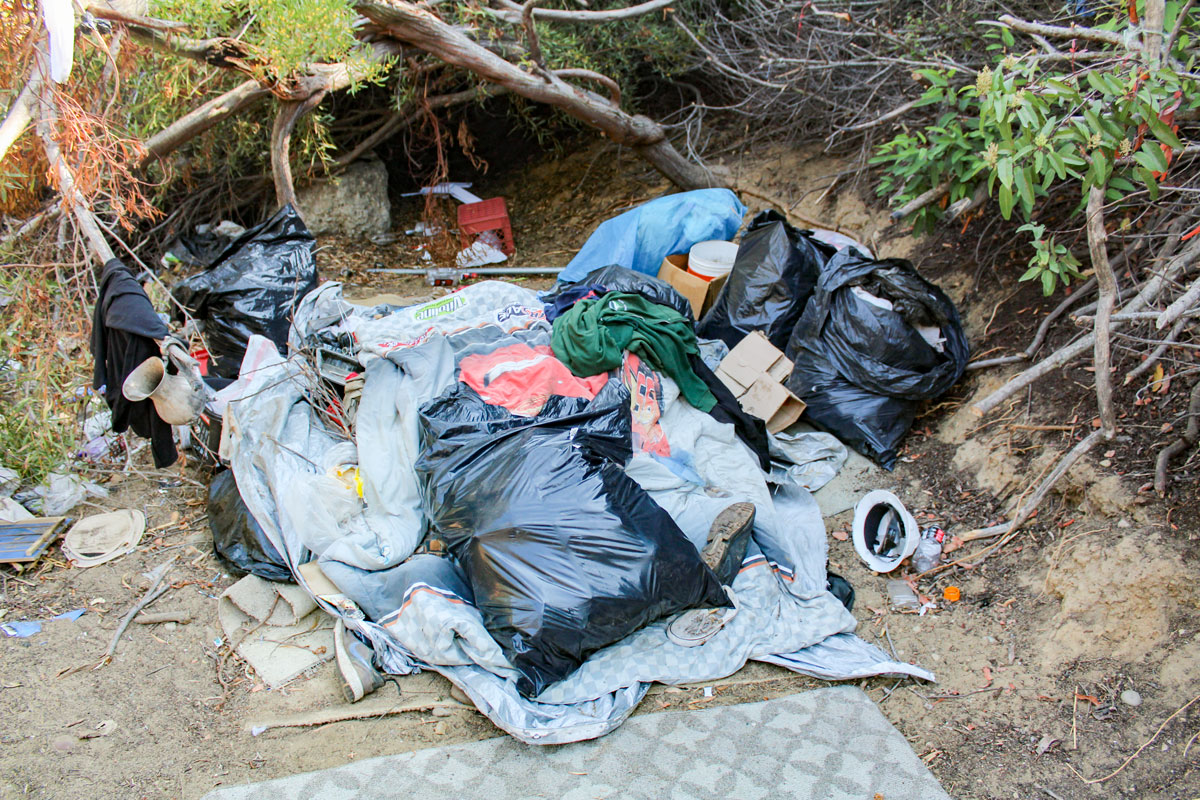 ENCINITAS — Nearly a week after The Coast News’ report of unsheltered individuals living in a large homeless encampment located in a ditch in Encinitas, the state’s transportation department announced it will resume clearing and vacating unsheltered dwelling sites located on its property near freeway offramps across the region.

The latest Caltrans announcement comes after residents in several North County cities have expressed outrage for months over potential safety and health concerns related to a number of transient dwelling sites and frustration with their local officials as to why these sites were seemingly ignored for more than a year.

Several city officials across the region have recently told media outlets that they have been unable to clean up the sites due to their location on state property, despite ongoing reports of unsafe and hazardous living conditions.

Only sites deemed to be high-priority encampments presenting immediate threats to life or infrastructure were cleared, according to Caltrans.

“Caltrans is now allowing its districts to address moderate and lower-priority priority encampments upon the availability of shelter or housing and assistance from local partners to help move people experiencing homelessness into stable living situations,” said Hayden Manning, a Caltrans public information officer.

Caltrans will receive $2.7 million from Gov. Gavin Newsom’s California Comeback Plan “for its encampment coordinators to mitigate safety risks at encampments on state property, clean trash and debris, and to coordinate with state and local agencies to connect people living in these encampments to support services and housing.”

As of yesterday, a reporter confirmed the site behind Oggi’s Restaurant along Encinitas Boulevard was still littered with trash and had not been cleared at the time of this story’s publication.

None of the officials at the city, county or state, including law enforcement, could provide a timeline of when the encampment would be cleaned up. Since The Coast News article last week, several residents have shared pictures and information about other homeless encampments located across the city.

Christian Gutierrez, the city’s housing services manager, said the HOPE (Homeless Outreach Program for Empowerment) team visited the site last Friday and “found evidence of campers” but no individuals were present at the time.

“City staff is currently coordinating efforts with Caltrans and the HOPE team to clean up the site and will continue engagement with anyone encountered on the premises,” Gutierrez wrote in an email to The Coast News.

Gutierrez was hired last month to help oversee the implementation of the city’s Homeless Action Plan approved in February.

As of today, county social worker Steven Gonzalez is the lone social worker assigned to respond, engage and assist unsheltered individuals in the city of Encinitas.

However, nine additional social workers are currently preparing to be deployed countywide by October as part of the Board of Supervisors’ recently approved pilot program to address homelessness.

In April 2020, Caltrans started to clear the aforementioned unsheltered dwelling site but was not completed due to “COVID-19 restrictions” and Centers for Disease Control and Prevention (CDC) guidance regarding these camps, according to Lt. Todd Norton, of the North Coastal Sheriff’s Station.

Norton, a member of the city’s HOPE team, said to his knowledge, the site has been there since at least July of last year but he is not sure how long Caltrans has been aware of it. Currently, Caltrans construction teams are working just yards away from the site along the freeway exit ramp.

According to the CDC website, city, county and state agencies tasked with dealing with homeless encampments were to allow people to remain at these sites to prevent the spread of disease and losing connections with service providers during the COVID-19 pandemic.

However, the guidance also states these entities need to “work together with other community organizations and offices to improve sanitation in encampments,” including ensuring unsheltered individuals have access to nearby restroom facilities with soap and water; or installing portable latrines with handwashing facilities or hand sanitizer — none of which was present at the campsite for the two individuals on the scene when The Coast News toured the location last week.

The site has clearly been used as an outdoor restroom and reeked of urine and feces, raising obvious concerns about the spread of Hepatitis A, a preventable viral disease transmitted by ingesting food or water contaminated by feces from an infected person, and other contagious diseases, including COVID-19.

Additionally, a stream bed running through the campsite connects to a culvert, channeling potentially contaminated water through a large drainpipe to Cottonwood Creek and Moonlight Beach.

Regarding testing the water at this particular site, Donna Durckel, communications officer for the county’s Land Use and Environment Group, told The Coast News that land-use jurisdiction for the site rests solely with the city of Encinitas.

Durckel said the Department of Environmental Health and Quality is limited to testing the water at the Moonlight Beach outlet and issuing an advisory or closure if needed.

As of August 6, the county’s Department of Environmental Health reported the bacteria levels at Cottonwood Creek flowing into Moonlight Beach “may exceed health standards” and currently advises against making water contact in this area.