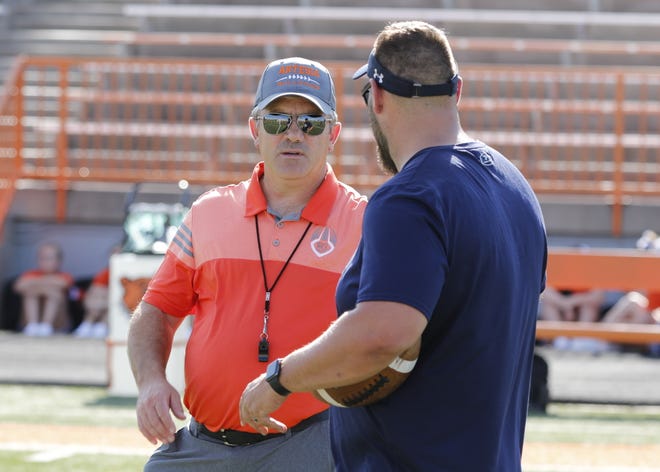 The Artesia Bulldog football team will begin its search for a new head coach to get the school it’s 31st state championship in football following the resignation of Rex Henderson on Thursday.

Henderson spent the last five seasons as the Bulldogs head coach but decided to walk away from the program in large part to wanting to spend more time with his wife and son, Hamill, who will be starting first grade next year.

“I would like to be more present with my son as he gets into more activities,” Henderson said. “With the football schedule that doesn’t leave you much time. Him being in kindergarten this year I knew it was coming. To experience his schedule you realize how intense it will be.”

Henderson led Artesia to state title No. 30 in 2017 when the Bulldogs went 11-2. Henderson fondly remembers the two games that changed the course of the season coming in back-to-back weeks. Artesia fell to Cleveland on the road, 56-49 and then eked out a 30-27 win against Los Lunas the following week which began an eight-game winning streak ending with a 48-14 blowout win over Belen for the title.

More:Artesia gets big win in Bowl Game vs. Alamogordo to end season

“The whole run to the title game everybody bought in and we got better every week. They took pride in being the best they could be,” he said. “After the Los Lunas game I challenged them to see how good they could be and they responded. We ended up being pretty dominant the rest of the season. It was a great run.”