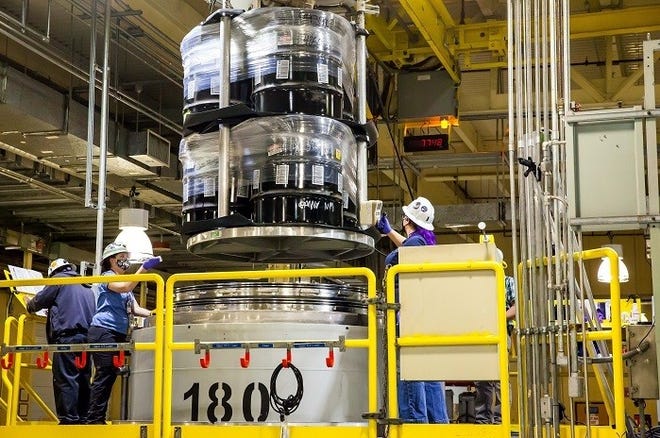 Shipments and disposal of nuclear waste resumed at the Waste Isolation Pilot Plant after a two-month pause in the repository’s primary operations to allow personnel to complete several maintenance projects in the underground and on the surface.

WIPP completed 97 total projects during the maintenance outage which ran from Feb. 15 to April 15, upgrading infrastructure throughout the facility.

The work involved mine operations, waste handling, hoisting, ground control, safety and engineering, and the break included a site-wide power outage to allow electrical work to be completed safely.

An outage is held each year for major projects that can’t be performed alongside waste emplacement, and routine preventative maintenance is conducted regularly throughout the year.

Reinhard Knerr, manager of the U.S. Department of Energy’s Carlsbad Field Office said WIPP will resume accepting shipments of low-level transuranic (TRU) from DOE sites around the country and will continue to emplace the waste for final disposal in WIPP’s underground mine.

TRU waste consists of clothing materials and equipment radiated during nuclear operations and is permanently entombed in a salt deposit more than 2,000 feet underground at the WIPP.

WIPP returned to accepting five shipments per week of TRU waste and plans to move toward 10 shipments weekly as the COVID-19 pandemic subsides.

“As those sites continue to make substantial progress in their cleanup missions, WIPP looks forward to continuing to safely accept these shipments and properly dispose of the waste,” Knerr said.

During the outage, inspections, maintenance and repairs to various systems at WIPP’s waste handling buildings where is prepared for disposal were completed, including four processing docks and four overhead cranes.

That allowed handlers to process eight TRUPACT-II waste casks on April 5 – the size of 112 55-gallon drums.

The largest project during the outage saw crews remove and upgrade 170 feet of rails in the underground used to transport pallets carrying waste to or from the waste hoist.

Salt movement caused the ground below the rails to heave, making the rails unleveled.

To solve this issue, the rails were removed, and a mining machine dug five down into the salt to level the floor.

Gravel ballast and mined salt were added for a base layer and the rails and metal plates were reinstalled.

Inspections were done for nine airflow bulkheads in total.

Floor coatings were also completed in the contact-handled bay and conveyance loading room, while multiple air filters were changed out on ventilation fans and mechanical inspections were conducted of the site’s supplemental ventilation system.

To reduce downtime due to flat tires, foam-filled tires were added to underground forklifts.

On the surface, computer system and electronics for waste container transporters, which transport casks of waste from delivery trucks to the processing bay, were upgraded.

“The amount of equipment repairs performed during the outage resulted in a huge improvement for waste handling,” Dukes said. “To have all of our equipment operating properly allows us to safely meet the demands of the accelerated shipping schedule and positions our team for success.”

“There was a lot of work that was completed through this maintenance outage,” Dunagan said.

“I want to give a shout-out to the work planners who put the work packages together, all the maintenance crews who went down and performed the work, and the folks in the underground who were diligent about getting all that work done.”