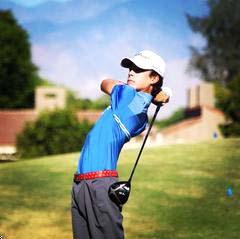 The waves were up and Josh Conlan was down for teaching his son how to surf. The younger Lucia got wet, but other water hazards quickly grew in importance.

“We then bought him some golf clubs when he was about 10,” Josh said. “And he was beating me in six months.”

Fathers often know best, but not this time.

“I think it was in three-four months,” Luciano said.

Last month Luciano, 16, won one of his biggest tournaments when he claimed the Charley Hoffman Foundation Junior 15-18 with a sizzling 6-under par 66 in the final round.

“That is really cool,” said Luciano, who attends Classical Academy High in Escondido. “I get to play against some of the best players in the world.”

Luciano’s best shots usually come from his irons and putter as he leans on his short game to play with the bigger boys. Although the gap between those long off the tees and Luciano is no longer daunting.

He’ll be among those at the prestigious JWC thanks to six birdies in Sunday’s final round at the Omni La Costa Resort and Spa after starting the day two shots off the pace. He chased down his friend and another Carlsbad teenager in Kasper Verwers and won by five shots by going 7-under par over two days.

Luciano gained a stroke after two holes and then went on his birdie barrage in the middle of the last round at the Legends Course, about the time Verwers produced a double-bogey.

It wasn’t all bad for Verwers as the top two finishers get their tickets punched for the JWC.

That was true for the girls’ division, too, as Oceanside’s Janae Leovao won her flight and will be inside the JWC ropes.

Anytime Luciano is outside, it’s A-OK with him.

“Anything that has to do with nature,” Luciano said. “The beach is nice and so is hiking.”

Golf became his liking because of its various challenges. No two shots are the same and that’s what draws Luciano to a game that he plays daily.

“It’s out in the open spaces and you can do whatever you want and hit your ball where you want,” he said. “You have to focus on each shot, what is your lie and what is the wind? There are always different strokes you have to hit.”

Luciano’s splash at the Hoffman event wasn’t a shocker. He didn’t miss a cut in 12 tournaments, won twice and finished in the top three seven times to be considered among Southern California’s top junior players in 2020.

The calendar changed but not his results. Luciano is on a roll and he’ll try to stay hot at this weekend’s PING Heather Farr Classic in Arizona, sponsored by the American Junior Golf Association.

His father, a regular at Cardiff Reef, is driving Luciano to the desert. Anyone tell Josh there are few waves to be had the Valley of the Sun?

That’s cool as long as his son, Luciano, is doing his thing.

“We never tried to push golf on him — we wanted him to try everything,” Josh said. “But he really took to golf, started reading books on it and really just played it and learned it on his own. That gave him a lot of self-confidence.”

Yet it prevented Josh from having a regular surfing partner. Luciano is a top-notch golfer, but he can’t equal Pops in the water. One will shred scorecards, the other waves and that’s fine with both of them.