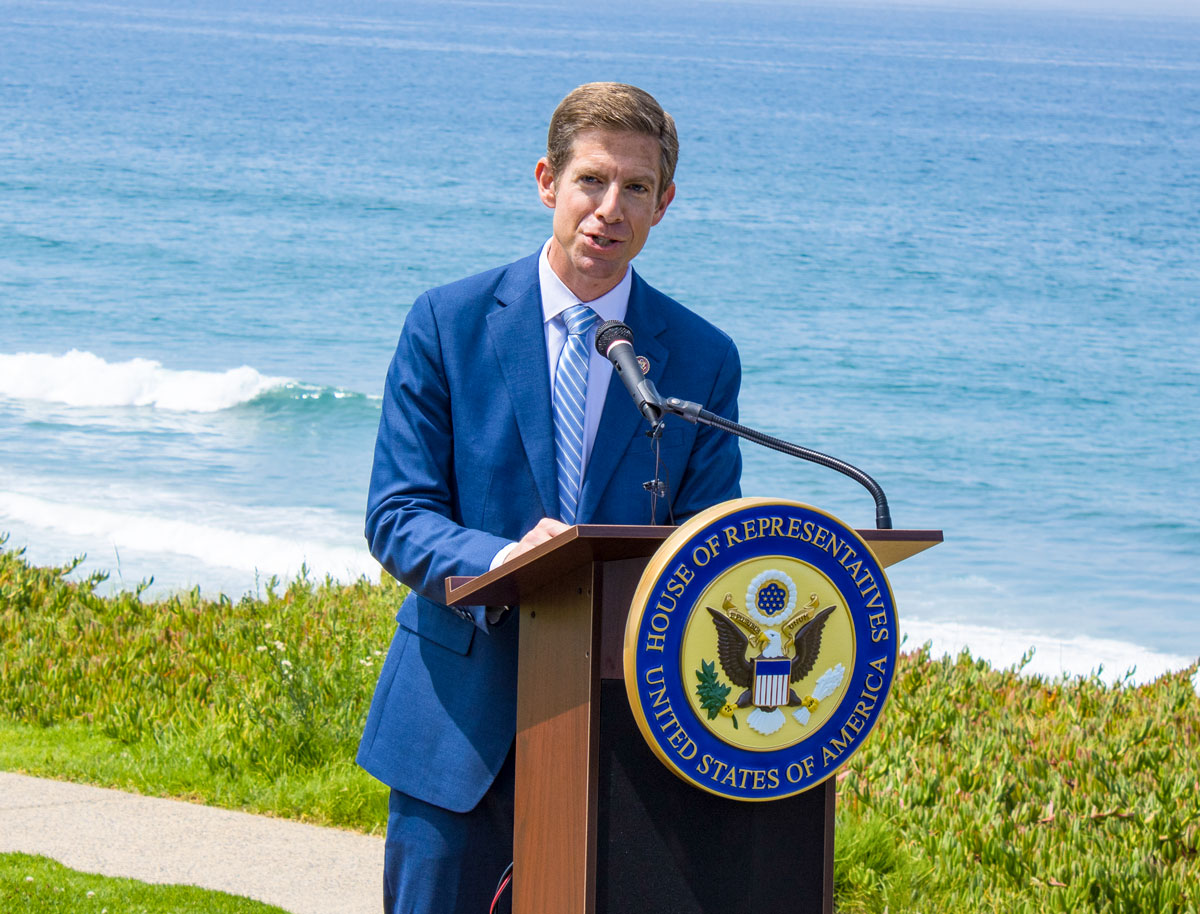 DEL MAR — Congressman Mike Levin paid a visit to the city of Del Mar on Tuesday to emphasize the importance of project funding to move the region’s rail line away from the Del Mar bluffs.

In February, a section of bluffs, located precariously close to train tracks, collapsed in Del Mar. While bluff repairs are ongoing, area officials continue to discuss stabilization projects for other sections of the bluffs.

But the movement of the tracks away from the bluffs entirely remains a focus of city officials, SANDAG and North County Transit District (NCTD).

Bluff collapses similar to the one last February are being attributed to rising sea levels reaching the base of the cliffs and other significant weather events linked to climate change. However, there are numerous factors that may go into this type of collapse, including rainstorms, groundwater and earthquakes.

“One of those effects is the erosion of our coastal bluffs,” Levin said during a press conference at Seagrove Park overlooking the bluffs in Del Mar. “As you know, the LOSSAN Rail Corridor, the second busiest intercity rail corridor in the nation, sits along these bluffs. It’s a glaring example of the kind of critical infrastructure that is threatened by this climate crisis.”

Over $11 million in federal grant funding has already been authorized to SANDAG and NCTD for bluff stabilization but much more will be needed to complete the design and construction needed to move the tracks away from the coastline.

Levin says he requested $12.5 million in the bipartisan federal infrastructure bill to go towards the design work for the rail project.

“We have to make sure we get that money across the finish line as well,” Levin said. “But that too is nowhere near enough in terms of our long-term needs.”

Funding can also come from the federal level through a congressional budget reconciliation process.

Levin was joined Tuesday morning by Gina McCarthy, White House National Climate Advisor and former head of the Environmental Protection Agency (EPA), along with representatives from the cities of Del Mar and Encinitas.

Del Mar Mayor Terry Gaasterland spoke about the importance of protecting the coastal bluffs by moving the tracks as quickly as possible.

“Relocating this railroad is essential for public safety, for our economy and for the preservation of these beautiful natural bluffs,” Gaasterland said. “We need to get these trains off the bluffs so they can sneak through tunnels very quietly and people won’t notice them.”

Encinitas Mayor Catherine Blakespear said that SANDAG is not waiting to make improvements to the LOSSAN corridor. Blakespear serves as the chair of the regional planning agency.

“The idea is to stabilize the bluffs where they are now so we can continue to have passengers and freight traveling on this rail corridor but then we need to move the tracks,” Blakespear said. “Most importantly, where are we getting the money to move them.”

Blakespear said the project would not be possible without the partnership of SANDAG, NCTD, Caltrans and the city of Del Mar, along with support from the state and federal levels.

“In particular, Congressman Levin, who has shown a tremendous amount of leadership in tackling this problem,” Blakespear said.