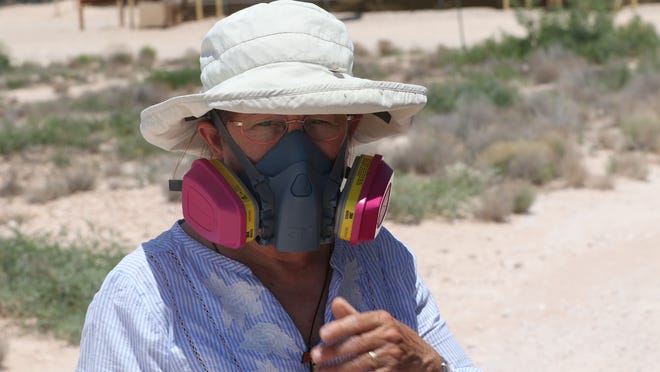 Front-line communities in the Permian Basin could be disproportionately impacted by air pollution from oil and gas, argued residents from areas known for heavy extraction.

Activists from Carlsbad and other oil and gas regions in New Mexico presented their case for stronger federal regulations on methane emissions from fossil fuel production during recent public hearings held by the U.S. Environmental Protection Agency.

Methane is a potent greenhouse gas and a key component of extracted natural gas and crude oil.

Restrictions to curb methane’s release into the atmosphere were long debated by the industry which worried heavy regulation could present undue financial burden while activists contended it was necessary to mitigate the effects of climate change.

In developing its new rules, the EPA aimed to solicit public feedback during the three-day hearing and through a public comment period open through July 30 and planning to issue a proposal in September.

During the hearing, Carlsbad Mennonite Church Pastor Nick King, also a member of local environmental group Citizens Caring for the Future said self-reporting of emissions by oil and gas operators – which the both the federal and state government rely on – was inadequate to convey the full scope of the pollution.

“And the methane problem may be even more prevalent than what is self-reported by the industry.  But we do know that it has dire effects- both locally and globally,” King said during the hearing. “Fossil fuels have been the lifeblood of our culture for more than 100 years, but they are also our poison.”

The NMED this year released a draft of rules to limit the release of ozone precursors, and the State’s Energy, Minerals and Natural Resources Department enacted its own rules calling for 98 percent gas capture from oil and gas facilities by 2026.

But King said federal enforcement was also needed to help a state lacking in oversight resources and protect the environment in New Mexico, and that higher standards were affordable to the international corporations that extract fossil fuels from New Mexico’s public land.

“So, any reasonable laws for the good of all – all of us and all of the world, as well as realistically feasible for the oil and gas industry, should be created- and enforced,” he said.

“In this highly competitive oil and gas industry, reasonable standards would cost a little more to implement, so it would not be fair to those companies that want to do the right thing, if not all operators are playing by the same reasonable rules to contain methane pollution.”

Another Carlsbad activist Kayley Shoup testified before the EPA that the recent oil boom in southeast New Mexico, led by the expanded use of hydraulic fracturing and horizontal drilling, meant increased health problems for residents.

A recent report from the Environmental Integrity Project showed the Holly Frontier-owned Navajo Refinery in Artesia, which sits alongside a residential area and blocks from an elementary school, was a national leader in benzene pollution.

Benzene, a known VOC, can lead to breathing illness like asthma and cancer.

Shoup said federal regulations should require the public be better warned of the environmental risks of living near oil and gas facilities.

“These rules are more than just rules,” Shoup said.

As the federal develops rules to address such concerns, Frank Macchiarola with the American Petroleum Institute (API) urged federal regulators to consider the economic benefit fossil fuels bring to the U.S. and to national security.

He API members represent all levels of the oil and gas supply chain, supporting more than 10 million U.S. jobs and 8 percent of the nation’s economy.

The industry already follows its own high standards for environmental protection, Macchiarola said, and uses market-driven solutions to limit emissions when possible.

API, the nation’s largest oil and gas trade group, supports a price on carbon, he said, as a means of assuring taxpayers receive due benefits from extraction.

“Our industry’s top priority remains public health and safety,” he said. “And we’re working everyday to have a positive impact in local communities. We are committed to delivering solutions that reduce the risks of climate change while meeting society’s growing energy needs.”