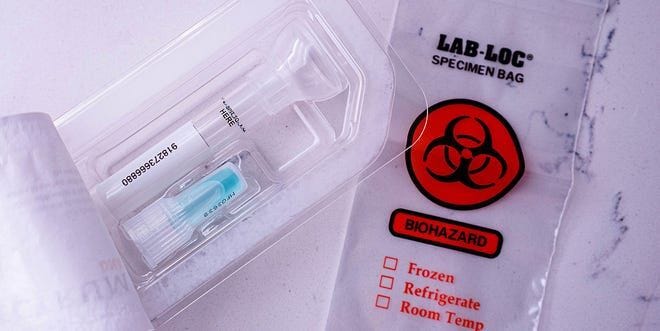 The grant was awarded to DOH by the Centers for Disease Control and Prevention’s (CDC) Epidemiology and Laboratory Capacity Funding program to help schools meet  surveillance testing requirements and keep students and staff in schools.

Unvaccinated teachers and staff are required to test for the virus once a week and schools are required to offer voluntary testing for unvaccinated students, according to the PED’s COVID-19 Response Toolkit for New Mexico’s Public Schools.

The PED set a goal for schools to test 25% of unvaccinated students on a weekly basis, the Toolkit states.

“Surveillance testing is a critical part of our protocols to keep schools safe and students and staff healthy,” Public Education Secretary Designate Kurt Steinhaus said in the announcement. “With this grant, schools will have the funding and hands-on support they need to complete this task without pulling money from academic programs.”

More:Carlsbad schools to receive over $8 million in relief funds. Here’s how the district plans to spend it.

New Mexico was awarded over $108 million on May 4, according to the U.S. Department of Education.

Coronavirus preparedness activities throughout the state were funded with $28 million. Those funds covered sanitization, planning for school closures and surveillance testing, according to the PED’s website.

The state’s initial plan for the new fund was to divide $30 million among New Mexico schools including private, charter and tribal schools.

According to the announcement schools can use these funds in a broad range of COVID-19 testing activities— including hiring new personnel, supplementing salaries of existing staff who support the school’s COVID mitigation program, licensing, waste management fees and equipment.

The remaining funds will be used to improve the information technology infrastructure to speed up administrative activities related to testing.

The PED stated that these plans are subject to change based on unknown variables.

“Testing and vaccination are two of the most important tools we have to protect our students, our schools, our communities, and our state,” said DOH Acting Secretary David R. Scrase, M.D. “Thanks to this new grant, schools will have even more resources to support safe, in-person learning.”

Carlsbad Municipal Schools was awarded $985,791 in ESSER I funds. According to the PED, the district planned to allocate $362,780 for preparedness activities.

The district plans to receive an additional $8.7 million in ESSER III funds. CMS planned to allocate $384,000 of those funds to hire health and safety officers to coordinate surveillance testing, according to the district’s initial budget presented at a board meeting on Aug. 17.

Washburn said staff are able to request kits online, administer the test themselves and mail them to the company for results.

The district receives test results within three to five days, but staff will still be able to work as they await results if they are not sick, Washburn said.

The district was also awarded $3.97 in ESSER II funds according to the PED website. Washburn said the district was using some of these previously awarded funds to conduct surveillance testing.