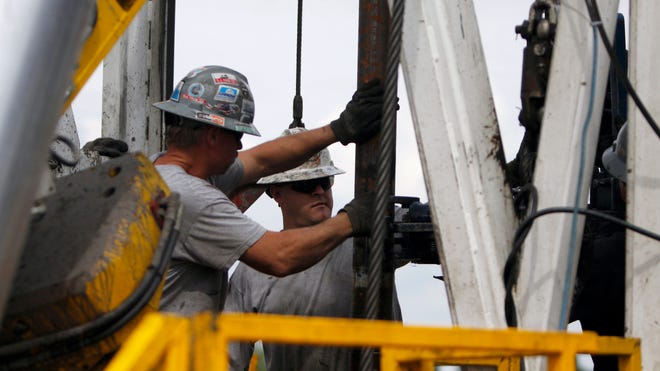 An estimated $121 billion in federal “subsidies” go to the oil and gas industry in Congress’ budget reconciliation bill being debated in the U.S. Capitol.

New Mexico environmentalists and some state lawmakers called on the state’s two Democrat U.S. senators, Martin Heinrich and Ben Ray Lujan, to support eliminating these alleged subsidies they said were perpetuating an industry accused of contributing to pollution and climate change.

During a Friday press conference, activists renewed their call to Heinrich and Lujan following a letter sent to the senators in August demanding they work to end such federal benefits to the fossil fuel industry and support a transition toward renewable energy.

New Mexico Sen. Antoinette Sedillo Lopez (D-16) of Albuquerque said pollution from oil and gas was especially troubling in the oil-rich Permian Basin region of southeast New Mexico, and that “subsidizing” fossil fuel extraction was taking money away from other public services.

She argued public land lease rates paid by the industry are unduly low, comparing a 20 percent rate paid to the state by producers on the total revenue of a lease compared with 25 percent charged in Texas.

“The oil and gas in the ground belongs to the ultimate sovereigns, the people. It does not belong to the companies,” she said. “What we know now is that oil and gas drilling and combustion are contributing greatly to climate change. It is not in the best interest of New Mexico or our planet to continue these subsidies.”

Sedillo Lopez also contended that oil and gas developments force the state to spend funds on maintaining roads impacted by dense oilfield traffic. She said Congress should follow pledges made by President Joe Biden in the lead-up to the 2020 election to end subsidies to oil and gas.

“Subsidizing fossil fuel also takes public money away from other uses,” she said. “I urge our senators to follow President Biden’s lead and eliminate these subsidies to fossil fuels.”

Areas of New Mexico that rely heavily on oil and gas for local jobs and funding, cities like Carlsbad and Hobbs, could be supported during a shift away from fossil fuels, Sedillo Lopez said, by emerging industries like renewable energy and carbon sequestration.

“To change that environment would be transformative to that area and for our state.”

New Mexico Rep. Andrea Romero (D-46) of Santa Fe said the environmental impact of oil and gas as a driving factor to climate change was made worse by federal tax benefits provided to oil companies.

She said the industry is a major economic driver in New Mexico, but lawmakers should work to reduce the state’s reliance in the face of mounting pollution concerns.

“To help the oil and gas industry right now just seems so contrary to our values as New Mexicans and Americans. In New Mexico we’re one of the worst emitters in contributing to climate change,” Romero said.

“We are in a very tough position as legislators because it is such a big money maker for our state. We should get out of that and we should not be subsidizing this industry.”

The initial letter calling on Heinrich and Lujan to support repealing fossil fuel “subsidies” was signed by multiple New Mexico environmental groups and residents across the state.

It argued New Mexico’s financial reliance on oil and gas revenue and environmental harm associated with extraction were both made worse by tax and other fiscal benefits to the industry provide by the federal government.

Robert McEntyre, spokesman for the New Mexico Oil and Gas Association argued in a statement that the oil and gas industry in New Mexico was not unduly supported by the federal government.

He said provisions in the federal tax code that provide deductions and other benefits were intended to help oil and gas and other industries invest in local communities and support the nation’s economy.

“The oil and gas industry receives no special tax treatment from the federal government. This is a well-worn and provably false narrative peddled only by those who want to stall oil and natural gas development in favor of massive taxpayer payouts to other businesses,” McEntyre said.

“Legitimate provisions in the tax code, like deductions, allow businesses across all sectors to invest in local communities and create jobs.”

McEntyre touted oil and gas’ contributions to New Mexico as an economic driver he said would support continued growth in the state.

“New Mexicans rely on the oil and gas industry for more than 134,000 jobs and $2.8 billion in revenue for our state budget and public schools,” he said.

“A misleading campaign as to how oil and natural gas operates only serves to malign the most successful sector of our economy that continues to deliver in critical areas like economic growth and funding for education.”