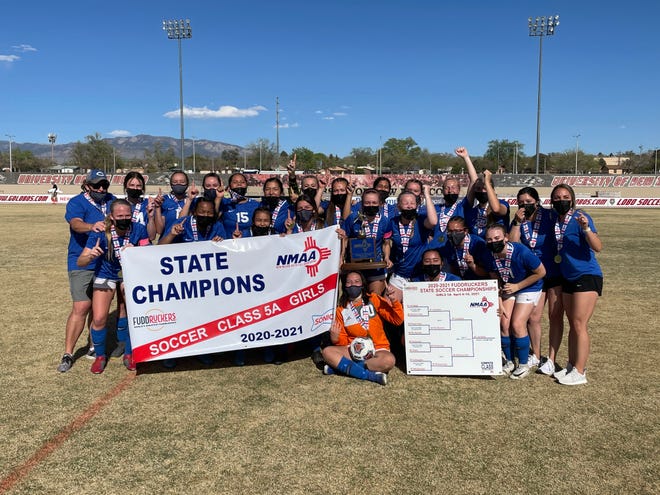 The Carlsbad Cavegirls soccer team under head coach Misty Long has always been a consistently good, but not great team. The Cavegirls have qualified for the postseason in all 13 seasons Long has been at the helm but the team never could get into the upper echelon of a state championship game until this year.

Playing the majority of the season ranked No. 1 in the state of New Mexico, the Cavegirls went 11-0, repeating as district champions and not only making it to the title game for the first time in school history, but winning it against No. 2 Albuquerque High in a game that wasn’t decided until the final minute of regulation, 1-0.

The COVID-19 pandemic made this season an unexpected one with all sporting activities in New Mexico postponed until early March. Despite all the setbacks of practices being canceled and the uncertainty of a season ever happening, the Cavegirls persevered.

Limited to pods in the summer for just a few weeks, Long did what she could with her players with conditioning drills. The practices didn’t last too long as a COVID-19 from one of the football coaches forced Carlsbad to stop the conditioning drills in the summer. During the winter months Long did what she could with the limited gym space to keep her players in shape.

“We had to get as organized as quickly as we could,” Long said with the practice schedule announced. “We had to know who was going to be out there playing for us and trying to scramble in all the good ways. We had to figure out when we were going to practice because all three of us are contract coaches. All the little things. The athletic office did a great job of helping us out but it was crazy for a while.”

Start of the season

The Cavegirls had their first game scheduled against Artesia for March 6. With the knowledge a soccer season would take place the team’s mood picked up and Long was ready for the shortened schedule, determined to make the most of the two non-district games.

“The girls started focusing and their mindset was different,” she said. “It was fun to see them get out and finally play against someone other than themselves.”

Carlsbad put up 10 goals against Artesia and three against Goddard in three days before enduring 11 days before district play began with the first three games all on the road.

The Cavegirls won those three games by a combined 4-0 and had to eek out 1-0 wins against both Clovis and Hobbs with goals coming in the final minutes of play for both games. It was now with the team at 5-0 that Long saw how special this squad was and her view was further cemented once Carlsbad played its home district games outscoring the same opponents 11-2.

“They were coming together. It was a fun environment and I could definitely tell we could not only go to state,” Long said. “I knew once we got the No. 1 seed we had a chance to go to the finals. Because of the way the brackets were the Albuquerque teams would have to come down here. I don’t think there was ever a moment where I thought ‘Holy crap this team can do it.’ They got better after every game. It was fun to watch that.”

Volcano Vista had ended Carlsbad’s postseason run the previous two years but the Cavegirls wouldn’t be denied this time. An early goal in the second half by Alexa Dugan was all Carlsbad needed to advance to the semifinals and two days later, a hard-fought 3-2 game against Rio Rancho punched Carlsbad’s ticket to the state championship for the first time in school history.

“The fun thing is Alexa plays in a club up there so she had a good grasp of the players up there,” Long said of the postseason run against all three teams from Bernalillo County. “She would tell the girls about them while us as coaches were more worried about keeping organized. I just wanted to make sure we were prepared and we’d continue to improve as a team throughout the year. We don’t have a chance to go up and scout other teams. I’m more worried about our players.”

Albuquerque hadn’t allowed a goal until its semifinals game when the Bulldogs beat the Centennial Hawks, 5-2. Long and her staff didn’t worry about the Bulldogs averaging 7.8 goals a game while Carlsbad averaged 3.2 in its 10 games leading up to the title game.

“You can’t get overwhelmed by stats,” Long said. “Every game is different. It comes down to which players show up to play on that day. Maybe because of our grit, heart, desire, call it whatever you want, our girls had to battle all the time.”

Once again, Carlsbad grinded out another win. Alexa Dugan scored the game-winning goal with 30-seconds left in regulation to get the 1-0 victory. But before Allie Meyers found Dugan sprinting down the middle of the field for the goal, Long was going over her plans should the game to into overtime.

“I thought we had at least one chance with Alexa at the top for a finish but as a coach you’re always preparing for the next step,” she said. “We had worked on penalty kicks and had our Top 5 (scorers) were in my mind the last couple of minutes I was preparing for overtime and the PKs (penalty kicks).

“When there was 10 seconds left it finally hit me. It was overwhelming for these kids and the adversity they had to deal with. It’s still hard to believe. The only reason I know it happened is I still have the Blue Trophy behind me. I have the bracket. It’s still crazy.”

This is just the third time a girls team from the south part of the state has hoisted Blue. Las Cruces won in 2003 and 2005 under Alex Reyes, the current Centennial head coach, but until this year no other team from southern New Mexico ever played in the state championship game, let alone win the title.

Future of the team

Carlsbad’s three leading scorers of Alexa Dugan, Abbey Dugan and Allie Meyers and the brick wall defense of goalie Korrine Bradford will all return next season as the foundation of the team. Long was happy to build an atypical team with players this season without previous experience and hopes more local girls will take an interest in soccer.

“I would love to have athletes come out from other sports. I never want to take them away from another sport though,” Long said. “Players like Anyssa Bernal who hadn’t ever played soccer before. She was always one of our first subs to come off the bench. Her athleticism was great.

“The 21 girls were absolutely fantastic. I hope this excites people. It does excite our district coaches. It excited Centennial’s coach. He was super excited for us. It shows we can do this. We don’t play enough soccer but the girls came through and put together a great season. Next year in the fall these kids who were focusing on other sports I hope we get them back. I understand their thought processes but we’ll miss them.”