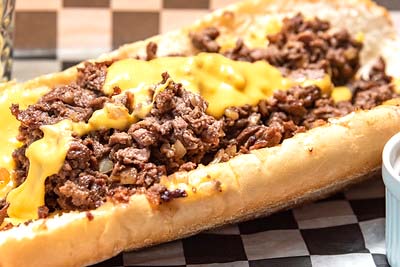 With sandwiches cleverly named for their geographical areas, the authenticity shines through. For example, the Nashville is buttermilk fried chicken on a brioche bun and the Santa Maria is a house smoked tri-tip with BBQ sauce. The Portland is a gluten free, vegan red pepper hummus with sprouts and avocado and the Philadelphia is, of course, a Philly Cheesesteak “wit” or “wit-out” grilled onions. They even have a Pasadena burger paying homage to the town that made burgers famous.

With their Japanese and Mexican lagers to their West Coast IPAs and wheat beers, their extensive list of local and nationwide draft beers and beers-to-go will please every palette.

But American Heroes and Brew is more than just a restaurant. With their roots deeply planted in family and community, owner Billy Daniels and his partners Dale Dyressn and Kris Wagner are committed to exceptional food and more. The patriotic hero theme is prevalent throughout from the stunning local art on the walls to their entire ambiance. Artwork highlights key historic and significant places in Carlsbad and throughout our country. And the hero theme could not be any clearer than in their “Nominate a Hero” campaign. In April, grocery store workers were the heroes being acknowledged. Check back each month at americanheroesandbrew.com to see what industry is being recognized and nominate a hero. Heroes receive 10% off their entire check, and the restaurant will donate $100 to a local charity in honor of that month’s winner.

From the children’s menu that offers a PB&J with Carlsbad strawberry jelly served on white bread, coated in frosted flakes and grilled French toast style, to their sweet potato doggy treats, American Heroes and Brew truly is unique. Join us in welcoming them to Carlsbad Village and know that very soon they will be that place where everyone knows your name.