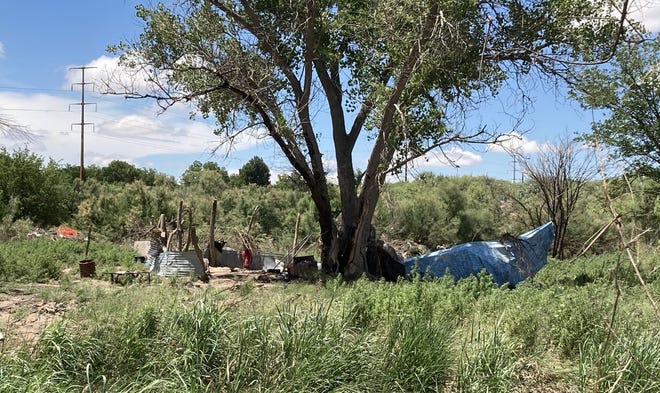 Patrick Juare’s new camp at Lower Tansill Dam is surrounded by piles of trash and debris collected by Carlsbad cleaning crews — remnants of the flood waters which swept through the area south of the dam last week and destroyed the encampment he once called home.

“We have nowhere else to go,” Jaure said. Juare is without a permanent home. He was among the elderly, veterans and a pregnant woman who fled the encampment ahead of the June 29 flood.

What used to be makeshift shelters and old fire pits remained surrounded by water and one-foot-deep mud. Some residents of the encampment returned days later, to wade through the mire and scavenge for lost belongings.

The flooding affected more than just the Lower Tansill Dam as it led to road closures throughout Eddy County.

A neighborhood near the dam was evacuated, with some residents rescued by helicopter after being boxed-in by the flood. Infrastructure like the San Jose bridge was overcome by rushing water and one man died after driving past a blockade and into the flood waters.

Carlsbad Police Chief Shane Skinner said he sent officers to the encampment at Lower Tansill as soon as he heard heavy rainfall was imminent. Multiple officers arrived within minutes to warn people of the coming danger by talking to them directly and using bullhorns, Skinner said.

Mayor Dale Janway said those in the encampment were believed to be at greatest risk and were the first to be evacuated, about an hour and a half before the flood waters arrived via Dark Canyon Arroyo.

But Adolfo Olivas, a counselor and pastor for the Carlsbad Community of Hope Center, said many of the homeless people he spoke to did not get enough time to gather their belongings during the evacuation.

He said that most escaped the flood with just their clothes on their backs, some even losing their pets. Flooding was a consistent issue for residents of the encampment, and many said they were used to the area collecting water but not of the scale seen during the recent floods.

Residents of the camp which house those without permanent homes expressed frustration for what they said was a failure to provide proper warning.

Paul Alen Newman had lived in the encampment for about a month, becoming stranded in southeast New Mexico when his truck broke down. He said those in the camp did not know what was happening or why they were being asked to leave on the day of the evacuation. Jaure said some thought they were simply being kicked out.

“They did let us know, but not in the right way,” Newman said.

Olivas said the people living in the camp often hide from unfamiliar visitors, which may have made the evacuation difficult.

Olivas visited the area often before the flood as part of the Hope Center’s outreach program. He said many of the residents began to recognize his truck and know he was there to help, but have been known to ignore others offering similar assistance.

“I do know that some may have been little hesitant to leave because that’s where they stay,” Skinner added. “Maybe if they’ve never experienced it before, they may not have realized how much water may come into the area and just how much danger they could be in.”

Olivas said he is still concerned about the many residents of the tent city that were displaced.

“Friday, we went driving around and looking for them,” Olivas said. “The ones I’ve talked to so far say everyone is accounted for.”

Skinner said the with more rain on the way and the beginning of the monsoon season, police were prepared to take action if necessary.

“Public safety is our No. 1 priority. We want to make sure that everybody is safe,” Skinner said. “We want to get word to everybody out there that may be in harm’s way.”

Claudia Silva is a reporting fellow from the UNM  Local Reporting Fellowship. She can be reached at csilva2@currentargus.com or  (575) 628-5506.