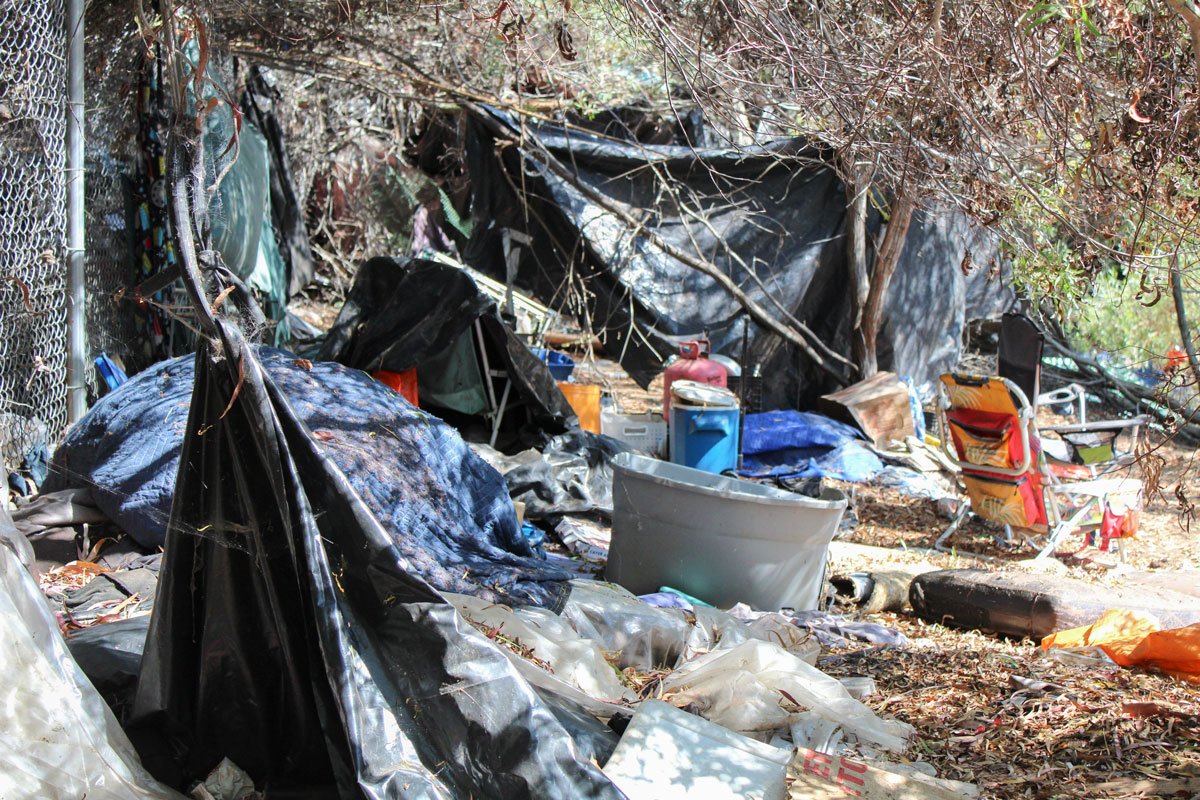 ENCINITAS — Homeless resident Victor “Vic” Ballance died of a suspected drug overdose on July 24 in a swath of undeveloped land just behind Oggi’s Restaurant in Encinitas, according to the San Diego County Medical Examiner’s Office.

After rumors of pervasive drug use and property crimes in the area, The Coast News, accompanied by two longtime Encinitas residents, Jeff Morris and “JD,” visited the location of Ballance’s death on the morning of Aug. 9 to inspect the area.

Morris, the controversial founder of Encinitas Watchdog and North County Citizens Coalition (NC3), has been covering the homeless situation in Encinitas for years.

During the walkthrough, The Coast News found numerous dwelling areas consisting of large tents with beds scattered throughout the woodlands; countless heaping mounds of junk and stolen equipment; islands of assorted plastics, cans, glass bottles and drug paraphernalia; putrified food containers and dirty clothes — all of which was hidden beneath the sprawling tree-covered ditch reeking of urine, feces and garbage.

A homeless man living in a tent, who requested to remain anonymous, said no one from the city or any of the local nonprofits tasked with homeless outreach has come to the area to offer services or supplies, such as medical attention, food and clothing.

The man, who was living in a tent with a makeshift carpet-sample walkway, said he was originally from Utah and had been living in Encinitas for the past four years. He also confirmed that Vic had recently died within the wooded parcel.

“My heart is broken today to find out and confirm that Vic has passed away,” Morris said. “I can’t stop thinking about what I could have done to prevent this. I notified the mayor, nonprofits, but as we heard, nobody is helping these people.”

Morris told The Coast News he used to be homeless as a young man and he wants the city to help get these people out of these unsanitary living conditions.

The area, which is located just to the right of the northbound Interstate 5 off-ramp stretching from Requeza Street to Encinitas Boulevard, also contains a large culvert that connects directly to Cottonwood Creek Park, which then drains to Moonlight Beach.

Some residents believe homeless residents utilize the drainage tunnel to move freely from the makeshift camp in the ravine to Cottonwood Creek Park.

Garbage, broken glass, old tents and overturned shopping carts were observed half-submerged in pools of brackish water as a nearby stream trickled through the tunnel into Cottonwood Creek Park. Numerous rats were seen scurrying from one trash pile to another.

Overlooking the canyon is a parking lot with a fleet of the city’s Public Works Department vehicles and nearby San Dieguito United Methodist Church and preschool.

“This is a public health hazard,” JD said. “There is rampant drug use just a stone’s throw away from a preschool. And the mayor and City Council are permitting this to exist in the middle of Encinitas? These people are living in horrid conditions but none of the state grant dollars are going to help them. Why not?”

An employee at Oggi’s said the steady vagrant presence has created a nuisance for the business and its workers, such as using the building’s electrical ports and leaving trash on the property.

“I would say everyone who works here has had a run-in with the homeless population down there,” the employee said. “Nothing super severe but it’s a bit of a nuisance.”

In October 2018, The Encinitas City Council declared a “shelter crisis,” which opened them up to establishing a lease agreement with Jewish Family Services to operate a Safe Parking Program at Leichtag Commons, just a few blocks from the large homeless encampment along Encinitas Boulevard.

But the parking lot doesn’t address or support the individuals without cars. In March, the Encinitas City Council adopted its Homeless Action Plan, which was billed as “action-oriented and includes steps to address the systemwide gaps identified through data analysis, stakeholder engagement and alignment with best practices in reducing homelessness.”

The plan’s first stated goal is to “increase the capacity of the city and the community to end homelessness in Encinitas through the development of a collaborative community-driven approach.”

According to the city’s website, the city, along with Carlsbad, Oceanside and Vista, received $250,000 each in District 76 Homeless Prevention and Intervention Funds “for homeless prevention and interventions services – in partnership with the Community Resource Center (CRC).”

Additionally, the city site says the “CRC will serve all who are homeless in Encinitas, including individuals, families, seniors, youth, veterans, chronically homeless, and other subpopulations,” but according to some homeless residents, nobody from the CRC or any other group has performed outreach services at this particular homeless dwelling site in Encinitas.

John Van Cleef, executive director of CRC, told The Coast News the nonprofit last conducted on-site outreach during a sheriff’s cleanup of the same area late last summer or fall. But Van Cleef does not agree with those critical of service providers for their alleged lack of response in handling the city’s homelessness problem.

“The topic of homelessness in Encinitas, as in any community, evokes strong feelings and reactions from people,” Van Cleef said. “There are some who say the city is shipping homeless people in and trying to make it like other beach towns that are homeless magnets. There are some that think the city is not doing enough to address the issue of homelessness. That’s not true. The city is doing everything it can.

“The reality of homelessness is really a community problem. We really need to come together to address the many dimensions of homelessness. Nobody wants anybody to live in their car. Nobody wants anybody to live in an encampment. It’s not a political issue. It’s a human issue. We have got to come together as a community and find solutions that work and help people.”

A point-in-time count conducted on a single night in January 2020 by the Regional Task Force on the Homeless reported a total of 80 homeless people living within city boundaries, 58% of whom live without shelter on the streets, beaches, parks and canyons.

A large homeless encampment in Encinitas, located near a preschool and restaurants, is filled with garbage, drug paraphernalia and other health and safety hazards that have seemingly gone unnoticed by the city, area nonprofits and Caltrans for months, if not years. pic.twitter.com/jpuv1Pdem9

The Coast News reached out to Caltrans, the reported owner of the property adjacent to the freeway offramp, as well as the CRC and City of Encinitas, but did not receive a comment in time for publication. The Coast News will update the story with comments as they arrive.

Additionally, The Coast News has emailed and left voicemail messages for Christian Gutierrez, housing services manager at the City of Encinitas, but Gutierrez referred all inquiries to Julie Taber, the city’s public information officer. Taber informed The Coast News via email that the city had no comment “at this time” regarding the encampment.

“All I want is Encinitas safe again and I want these nonprofits to stop using these people for money,” Morris said. “As an expert former homeless child and thief, I know what it’s like to be hungry. I know what it’s like to see somebody have something you don’t have. And if I was homeless and was brought to Encinitas, I would steal everything that isn’t bolted to the ground.”

A resident submitted his concerns regarding the encampment to Annemarie Clisby, executive assistant to the mayor and city council, and shared the following response with The Coast News:

“Thank you for taking your time to share your concerns with us regarding this issue. The Mayor and City Council have received your message. I have contacted the Sheriff and our Housing Manager to get the HOPE Team there. They may contact you for an exact location. We take our residents’ concerns, opinions and suggestions seriously. If you have any questions or other concerns, please feel free to contact me.”

EDITOR’S NOTE: This story has been updated to include comments from the City of Encinitas and CRC Executive Director John Van Cleef.