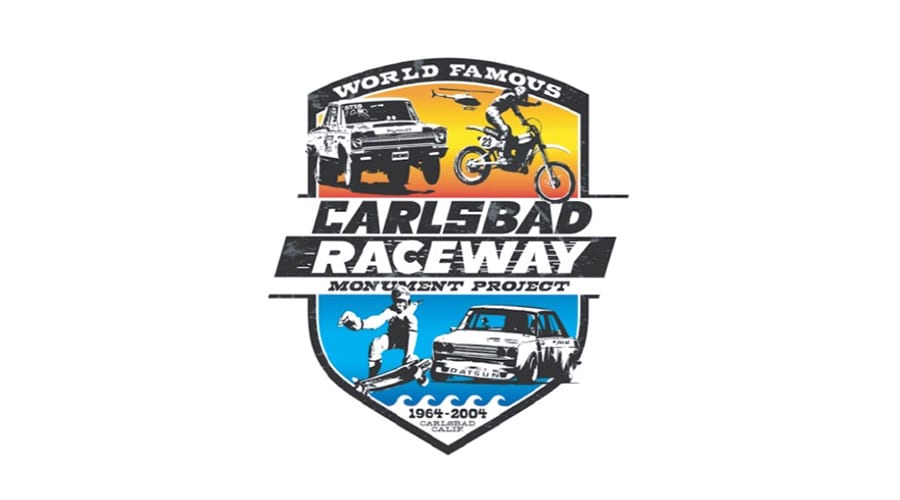 VISTA – After almost 11 years in development with fits and starts at several possible locations, the Carlsbad Raceway Monument Project will be officially announced with the unveiling of the monument’s design at its permanent home in Vista, overlooking the original Carlsbad Raceway property.

The project will be unveiled to the public at 1 p.m. on June 22, 2021 — the same day American (and San Diego local) Marty Moates became the first American to beat the Europeans and win the United States Grand Prix of Motocross at Carlsbad in 1980. Moates’ victory was aired on ABC’s Wide World of Sports.

The 1,300-square-foot monument will highlight all the activities that went on at Carlsbad including the various kinds of motorcycle racing, drag and sports car racing, the skateboard park and more during its 40 years of operating from 1964 through its closing in 2004.

It will also tell the story of how the park was started in 1964 by Larry Grismer and Sandy Belond who purchased the property in 1961. The public will have the opportunity to purchase engraved bricks as pavers with their families’ names on them and company-sponsored features will also be available.

Schmidt Design Group of San Diego has designed the project that features an innovative “overlook” that struts out over the valley overlooking the sacred motorsports property.

The project came to fruition after filmmaker Todd Huffman released his film about Marty Moates’ “One Day of Magic” in his documentary film The Carlsbad USGP:1980 in 2010.

Huffman and Moates’ brother David Moates began brainstorming the idea for a permanent monument with Encinitas resident Scott Cox. After 10 years of trying to work with various sites in the City of Carlsbad, the project has found a home at the Keystone Innovation Industrial Park by Baidee Development in Vista overlooking the raceway property on the northeast section of the property.

The site already hosts two microbreweries (Eppig and Dogleg) next to the monument site.

“It’s great to finally have a home for this wonderful monument that people from all over the country and world can visit, learn about and remember all the great activities that occurred here at the Carlsbad Raceway,” said Todd Huffman, producer and director of Pipeline Digital Media (PDM).

The project will be owned and managed by the Road 2 Recovery Foundation (R2R) in Encinitas whose mission is to help AMA-licensed motocross and supercross professionals and action sports athletes with financial assistance after sustaining career-ending injuries.

A registered 501(c)(3) non-profit organization, R2R will be responsible for the fundraising, construction and ongoing maintenance, insurance and other responsibilities for the project. They will also benefit from ongoing fundraising and awareness the monument will bring the organization.

“This project embodies the golden era of our industry and is an important part of a shared history for our community,” said Lori Armistead, Road 2 Recovery’s director of marketing and PR. “We’re proud to be part of something that represents such a significant part of San Diego County and all the activities that took place here.”

R2R will begin selling the monument’s engraved bricks and other features on that day before online sales will begin on June 23, 2021. It’s expected the fundraising will take several months to raise the $250,000+ construction costs before the monument’s construction can begin. A grand opening could occur in the fourth quarter of 2021 or early