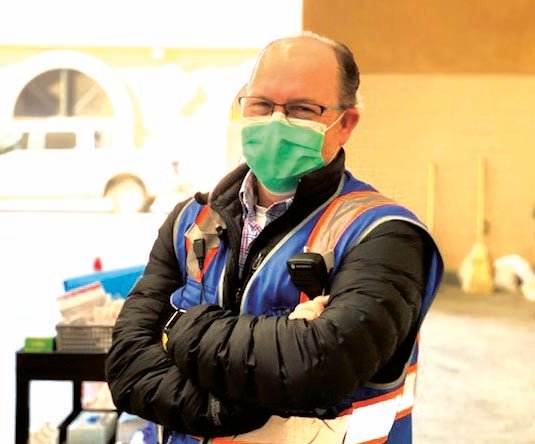 Even though the COVID-19 vaccination superstation at the Del Mar Fairgrounds doesn’t open officially until 8 a.m., preparation begins daily at 5 a.m. with much to do to make sure the system Scripps has set up keeps rolling.

From checking on the daily supply of vaccines, which is often not as much as he would like, to other administrative duties, Collins has acted as the quarterback of the site to make sure everything goes as planned.

“We need to make sure we have the staffing that we need to support the lanes and if we run short, then we have to redesign our flow for the day,” Collins said. “I’d say every single day is a startup.”

Collins, an Encinitas resident and the chief operating executive of Scripps Green Hospital with experience in helping in disaster situations, was an easy choice to lead the effort.

Chris Van Gorder, the president and chief executive of Scripps Health, has known Collins for many years during his time in the medical field.

“I formed what we call the Scripps Medical Response Team right after 9/11 and Tim joined early on,” Van Gorder said. “He was actually my lead in Nepal when we sent our team to Nepal after their earthquake in 2015. He’s had a lot of disaster experience and, as an EMT, a lot of field medical experience.”

That level of experience has prepared Collins well for the job at hand in Del Mar. The superstation there has demonstrated a remarkable level of efficiency. The site has been able to administer upward of 5,000 shots in just half of a day; it closes its doors at noon daily.

The only problems that workers have run into that stop them from giving more shots is the simple problem of supply. The site has had to temporarily shut down on occasion due to a lack of doses.

“It’s become a bit better over the last couple of weeks. We still don’t necessarily have as much as we would like. We’re working with the county on a weekly basis to request as much as we can get,” Collins said. “We’re hopeful that in future, as more supply becomes available, that we can get more and we can expand the hours of operation.”

Collins says that from the beginning, Scripps set up the site in partnership with the Del Mar Fairgrounds with the ability to administer 10,000 shots a day. The team remains ready to hit that mark if and when supplies allow.

A top priority for the station is swiftness, with the goal of having people in and out of the site in 30 minutes, including the 15-minute observation time after the shot is administered.

“Pretty much we’ve held to that standard overall. So, when people say they’re really busy or they don’t have a lot of time, they know they can trust in Scripps and trust in all the folks that are volunteering their time to make sure they get their vaccination in that timeframe,” Collins said.

It wasn’t always as smooth and efficient as it has become. When the site opened for its first day on Feb. 12, volunteers were only able to administer 250 shots over a couple of hours.

“The really cool thing is the volunteers that have come in haven’t really been volunteers, they’ve been owners of the process,” Collins said. “So really by having these people come in and then come back, they’ve been able to give us their observations on how we can improve our system.”

Even with the success of the vaccination site, Collins remains realistic about where the community stands in terms of the ongoing pandemic and how the future might look.

“I am hopeful that the state’s plan to open things up on June 15 also ties into increased vaccination supercenters and increased supply. You can’t have one without the other,” Collins said. “You got to get a lot of people vaccinated to get to the 75% herd immunity. I’m hopeful that the state has a multi-pronged approach that goes with that to achieve that standard by June 15.”

The superstation at the Del Mar Fairgrounds is open seven days a week from 8 a.m. to noon by appointment only. You can make appointments for the site at the state’s MyTurn website. The site offers both drive-thru and walk-thru options.