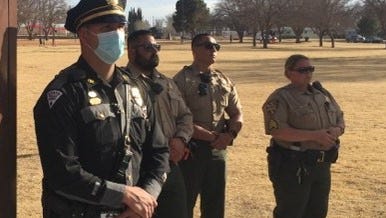 Family and friends of slain New Mexico State Police Officer Darian Jarrott were joined by local law enforcement members of the Carlsbad community Saturday at the Beach Band Shell to pay tribute to the fallen officer.

Jarrott, 28, who was stationed in Carlsbad for a brief time, was shot in early February near Deming while conducting a traffic stop.

“What I remember most about him was his kind spirit,” said Carlsbad Police Chief Shane Skinner.

“We cops are called to service for many reasons. He gave everything serving the citizens of New Mexico,” Cage said.

“I did not know him well. I love my warrior brother.”

At the conclusion of his speech, Cage saluted Jarrott for his service.

“He was a brother to one who wasn’t blood but loved and cared for him as he was who longer gets that phone,” said Gabriella Jarrott, the slain officers widow.

“He just wasn’t a New Mexico State Police officer, Darian was an amazing friend for people who can no longer kick back and have a beer and watch sports with. He was a son to a surviving mother and father who no longer get to see that full teeth smile,” she said.

“He was a brother to surviving siblings who no longer get to hear silly jokes because of his amazing personality.”

After her speech, family members and others embraced Gabriella Jarrott as balloons were released into the Carlsbad sky in memory of the late officer.

Jarrott was laid to rest in his hometown of Lordsburg on Feb. 12.