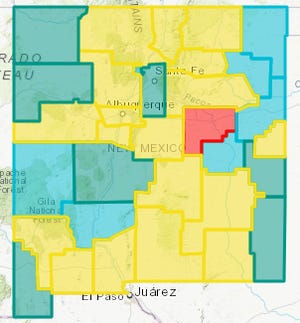 The Waste Isolation Pilot Plant reported less than five new cases of COVID-19 for the fifth week in a row and the second week with only one new infection.

The new case was reported between March 4 and March 10, and brought WIPP’s total to 258 infections

WIPP reported three workers were recovering from the virus and were not yet cleared for work.

COVID-19 numbers continued a steady decline at the nuclear waste repository near Carlsbad this week, after weeks of double-digit numbers during the fall and winter.

The downward trend, officials said, was reflective of a reduction in infections throughout the southeast region and across New Mexico.

In a statement from WIPP’s primary operations contractor Nuclear Waste Partnership, the company said it was continuing to follow COVID-19 protocols such as mask wearing at the site near the border of Eddy and Lea counties, along with teleworking when possible.

“We are very pleased to see the reduction in COVID-19 numbers in our communities and at the WIPP site, which is representative of the reduction in positive cases both statewide and locally,” the statement read.

“WIPP continues to follow all applicable federal and state COVD-19 guidelines and will continue to closely monitor conditions and COVID impacts to overall WIPP operations.”

On Thursday, Eddy County reported seven new cases of COVID-19 for a total of 6,550 infections, while Lea County had one new case for a total of 8,107.

Both counties near the WIPP site were reporting daily caseloads in or near triple digits during the fall and winter when the virus appeared to peak in New Mexico.

In total, New Mexico reported it had 3,845 deaths from the virus since the pandemic struck the state in March.

Meanwhile, Eddy and Lea counties’ improvement led to some COVID-19 safety restrictions being lifted as Eddy County shifted into the “yellow” designation and Lea County entered the “green” category.

This allowed for Eddy County to reopen indoor dining and allow for larger gatherings, while Lea County could now raise capacity at restaurants and other public spaces.

More:Eddy County gets clarification from State on COVID-19 spike

Counties achieve yellow status by crossing one of two thresholds, and green by crossing both – a case positivity rate of less than 5 percent and less than 8 cases per 100,000 residents.

“Even as New Mexico rapidly vaccinates eligible populations with all available supply, it is important that New Mexicans still seek out COVID-19 tests if they feel symptomatic, if they have traveled, if they have spent time unmasked in the company of others – particularly non-household members and particularly indoors,” read a statement from the office of New Mexico Gov. Michelle Lujan Grisham.