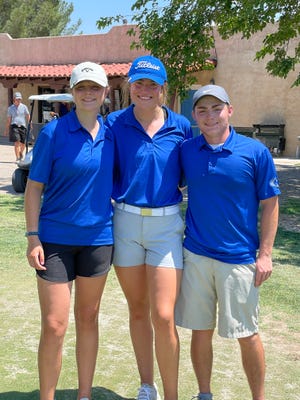 The Carlsbad golf team will send three golfers to compete at this year’s state tournament after Monday’s district tournament at the Riverside Country Club.

Caveman senior Eli House and Cavegirl senior Cannon Hughes and eighth grader Lindsey Carter had the best scores outside of the team automatic qualifiers and will be competing for individual honors rather than a team trophy.

Both Hobbs boys and girls teams took home first place honors. The Eagles shot a 302 and the Lady Eagles shot a 363. The Carlsbad Cavemen came in third place (351) behind Roswell (322) and ahead of Clovis (370). Only Hobbs and Clovis fielded a complete girls team and were both automatic qualifiers. The Cavemen had a full team but the Cavegirls had only Hughes and Carter to represent them.

Carlsbad golf coach Byron Jones was pleased with his entire team for the season regardless of how any of them individually finished.

“It’s been a tough year but it’s also been a blessing,” Jones said. “They’ve fought through adversity but were able to come out on the other end smelling pretty. This will just help them out later in life when bad things happen to them they can look back and know they can persevere. I’m very proud of them for fighting through this. Lindsey was quarantined for 10 or 12 days and she was still out here playing golf when she could and it showed.”

Carlsbad’s two seniors will have a chance to end their high school careers with a medal around their neck and a chance at an individual state championship while Carter hopes to just learn how to play in a state tournament and develop in her four additional years of eligibility.

Two years ago when the Cavemen had their last golf season then-sophomore Eli House had just begun work with a new set of irons. He’s gotten very familiar with that set and now refers to it as his “old pair”.

“We’ve had our ups and downs with the clubs but I get more comfortable with them each day,” House said after the district tournament. “I’m going to work on hitting my irons and getting the ball closer to the hole. I want to get good looks at birdies and praying that my putter holds out.”

House shot a 79 for the day which was good enough for sixth individually. He wants to win a title but said he’ll settle for a Top-10 finish. He’s never played at the state championship course but plans to travel up this weekend to get a feel for it.

Carlsbad’s other senior golfer finished in third place overall and would have qualified regardless of which teams won. Hughes averaged 94.6 strokes per round this season and shot an 87 at Riverside.

“I did not expect to get this far,” Hughes said afterwards. “I’ve been playing a lot lately and I was a little rough on the driving range this morning so I did the best I could and I’m impressed I did this good.”

Hughes said if she can shoot below a 90 at the state tournament she’ll consider this a proper sendoff to her high school career. She’s also glad her teammate will be traveling with her to close out the year.

“It’s great to have a teammate to support each other and I can show her the ropes since she’s only an eighth grader,” Hughes said.

Carter finished her first year of varsity golf with a score of 95 which was the fifth best round of the day. The qualification to the state tournament took her by surprise.

“I didn’t think I would qualify today,” Carter said. “I was just focused on beating 100. This is my first year playing golf so it’ll be good to make a name for myself. I’ll be working on my chipping and putting because I probably could have shaved 10 strokes off my game today.”

Carter said if she can shoot a 94 or better, one fewer stroke than at the district tournament, she’ll consider it a successful end to the season.