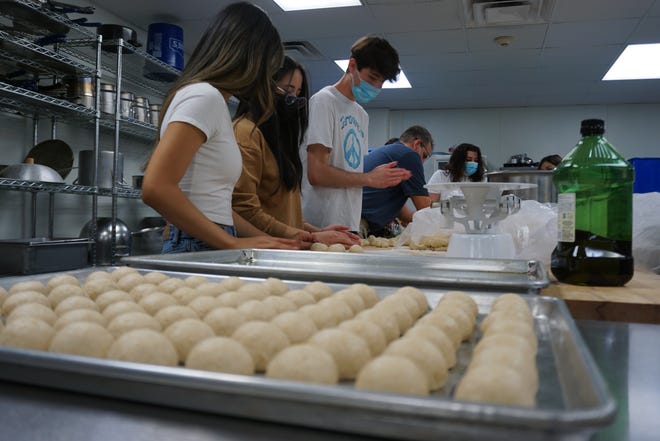 In the basement of Carlsbad High School’s cafeteria, a group of culinary students were hard at work rolling dough into balls and making bread rolls.

As they lined up the balls on a sheet of parchment paper, their classmates prepped salads to pair with the New Mexico green chile chicken soup intended for sale on Thursday.

The CHS culinary department and  Business Professionals of America partnered to open a take-out service for the Carlsbad community and teach students how to run a business.

The business is run by the students with the help of culinary teacher Kevin Zink and BPA advisor Terry Carrera.

The program allowed culinary students to get first hand experience with cooking in a professional environment while BPA students learned about advertising and marketing, said CHS Assistance Principal Jana Smith.

Zink works with culinary students and helps them plan the weekly menu and make all meals from scratch.

While the culinary department handles all the cooking, BPA students like Lidia and Domonique help manage the administrative and financial side of the business.

This can include adverting, taking orders, balancing the programs budget and running the culinary departments Facebook page, Carrera said.

Lidia said she has also helped by calling customers to let them know when meals would be ready and learned about graphic design by designing flyers for the program.

“This is helping me get ready for my future and what I want to do,” Domonique said.

Anthony, a culinary student at CHS, said the greatest strength of the school’s culinary program is the diverse background of its students.

“No matter what economic stances you come from, no matter what language you speak, no matter what region you are from, the one thing that ultimately unites everyone in this classroom is their love for culinary arts,” Anthony said.

Carlos, one of the students that helps operate the Meals-To-Go business, said he hopes to introduce the bacon wrapped hotdogs made with special rolls that can hold a variety of toping from his home state of Sonora, Mexico.

Carlos said he joined the culinary program because he wanted to learn how to cook.

After the COVID-19 pandemic forced New Mexico schools to shut down, Carlos said he did not get a lot of opportunities to dive back in the kitchen.

“Now that we have this chance it’s actually pretty cool because we get to make food and anything we sell actually comes back to us so we can make some more,” Carlos said.

The CHS Meals-To-Go program publishes its weekly menu and order form through its Facebook page. Meals are distributed once a week.