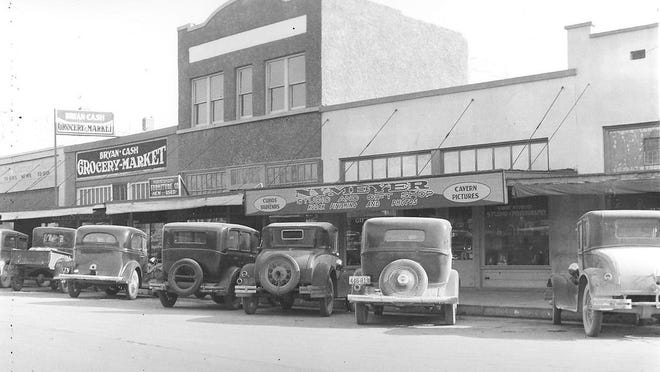 A photo dated to 1972 shows the Current-Argus logo across a brick building at 103 W. Mermod St. in Carlsbad, New Mexico.

Sometime in the 1970s, the newspaper moved to 620 S. Main St. – a 2,000 square foot building with plenty of room to run the Goss Community Press which printed both a morning and evening editions in its early days.

The press saw its last run in 2014 after press operations were consolidated by parent company Gannett Inc., and in July 2021 was removed from the location it occupied for more than 50 years as the Carlsbad Current-Argus prepared to move its offices from Main Street back to downtown Carlsbad.

The move was the result of shrinking staff and an increasingly digital work space (partly because of the pandemic but mostly because of the nature of journalism these days), and the desire of our corporate owners to dispose of real property (the cost of maintaining the aging building was cumbersome) and to focus on the journalism.

The building at 620 S. Main St. was sold to Oasis Church.

What you need to know about the move

As the Current-Argus works to make its new home on Canyon Street comfortable, please bear with us.

The Main Street office was closed to the public in March 2020 in response to the COVID-19 pandemic, and has remained shuttered as our community continues to fight the spread of coronavirus.

The staff of the Current-Argus began to work remotely during that time, and moved into a hybrid work environment only weeks ago.

How can customers and subscribers access services? Most of our services can be accessed by phone, email or online.

Those wishing to publish legal advertising can email their legal requests to legals@currentargus.com.

Classified advertisements can be placed by emailing classifieds@currentargus.com or by visiting our self-serve classifieds portal at http://classifieds.currentargus.com/. This portal can assist you in placing announcements, retail, garage sales and real estate and rentals.

Obituaries can be submitted by calling 1-866-990-2635 or by emailing ccaobits@currentargus.com.

Connect with customer service at CarlsbadCurrentArgus@gannett.com.

For any other needs customers are welcome to email news@currentargus.com.

The Current-Argus continues its commitment to reporting on issues of import to Carlsbad and Eddy County, and to delivering the best service to our subscribers and customers.

After five decades of calling 620 S. Main St. home, the bustle of the move revealed pieces of the Current-Argus’ past.

In a corner closet we discovered a seating chart, drawn by hand, showing long-time Current-Argus reporter Stella Davis seated in front of someone named “Mary Grace” and across the newsroom from then Publisher Sammy Lopez. The drawing was undated but showed the Current-Argus advertising and reporting staff was some 30 people strong.

A search of historical photos unveiled portraits of past reporters, editors and publishers. Skipper Rigdon retired as publisher in 1970. Gil Hinshaw led the newspaper from 1966 to 1969. Editor, and later publisher, Ned Cantwell was on hand in 1984 when the Current-Argus first introduced word processors to the newsroom.

More recently, David Stringer, Rynni Henderson and Danny Fletcher were publishers of the Current-Argus, with Fletcher the last publisher of the publication before the position was eliminated.

Among the portraits was a photo of war correspondent Kenneth Dixon, whose career began at the Current-Argus.

The Carlsbad Current-Argus was delivered by foot, bike, moped, car and even at one time in 1962 by airplane. Frank Kindel’s single prop airplane would depart from the Carlsbad Air Field with Sunday editions aboard for delivery.

The oldest photo I came across showed a large crowd gathered near Fox and Canyon Street for what was reported as the Current-Argus Christmas Show. A year later, a photo was snapped of the Daily Current-Argus’ brick building on Canyon Street.

It is my hope that in the coming decades, the Current-Argus’ new home will be the scene of many more memories.