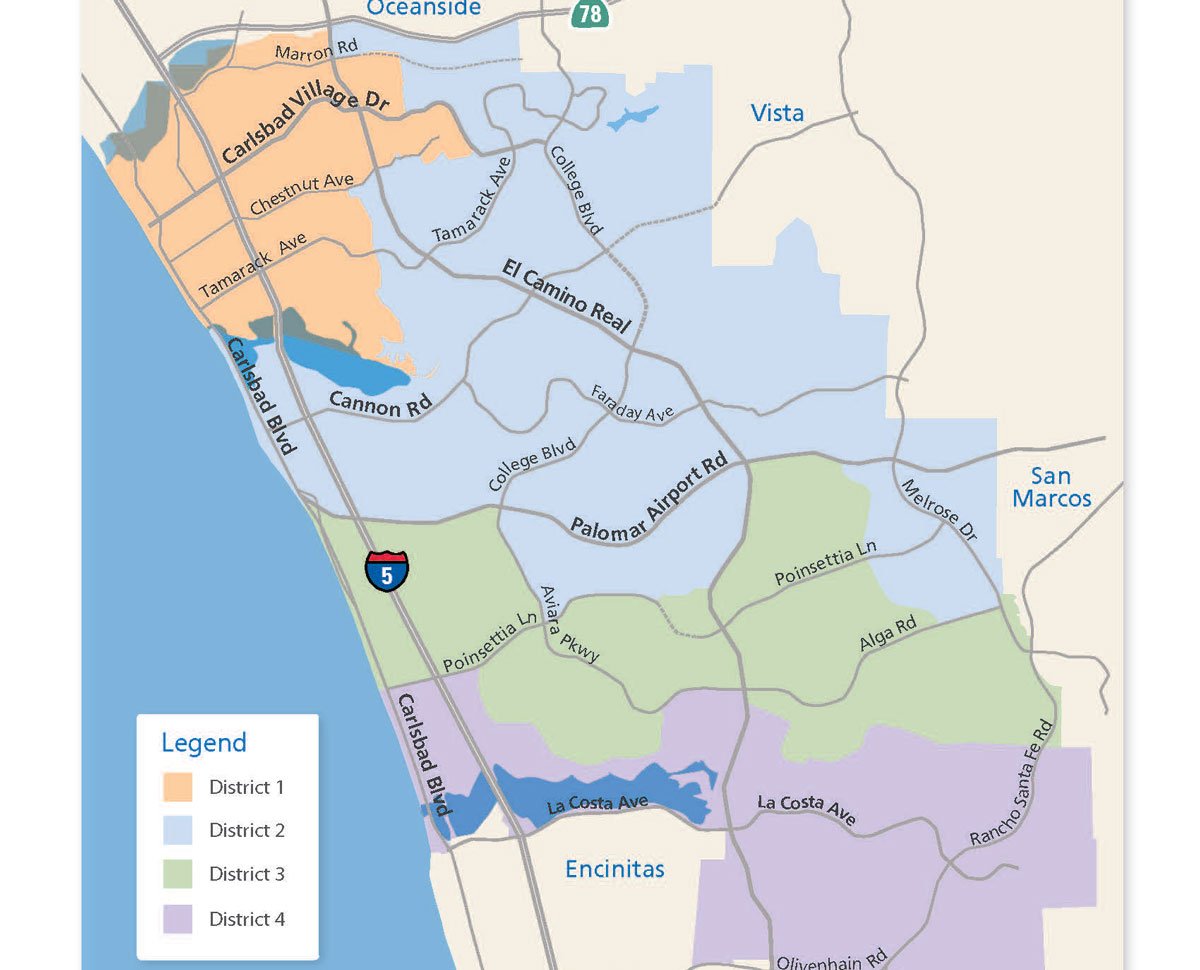 CARLSBAD — In a little more than one year, new boundary lines will be drawn for district elections in the city of Carlsbad.

“What would be the least biased way is to have some sort of commission,” Bhat-Patel said. “I also believe multicultural outreach would be great.”

Every 10 years, municipalities must re-draw their lines in conjunction with the U.S. Census to account for population changes.

All three councilwomen said establishing a commission would also help prevent partisan bickering and gerrymandering, although the process to form a commission is complex.

An Independent Redistricting Commission is convened after a separate panel appoints commission members consisting of equal parts Democrats, Republicans, Independents or other affiliations. This model removes control over the districting process from the council.

However, Mayor Matt Hall questioned the request for a commission, noting the initial process back in 2017 was smooth and equitable.

Additionally, Hall said the city’s population growth, which staff estimated to have increased by roughly 9,000 residents, would provide for an easy district map update and not require significant changes. Councilman Keith Blackburn agreed.

“I think the fewer changes to those boundaries we make, the better,” Blackburn said. “Whatever the census shows that are changes in our community, I would hope we could just gently move the boundaries so that we meet all the needs of the census.”

As for the timeline, due to the COVID-19 pandemic delays in the 2020 census, state government was granted a four-month extension by the California Supreme Court, pushing the districting deadline to Dec. 15, according to CalMatters.

Currently, updated federal census data is estimated to be available as early as Sept. 30. The city will then hold at least one public meeting (possibly two) in October, focusing primarily on defining neighborhoods and showing how to use public mapping tools.

Shortly thereafter, the State of California is expected to release its adjusted census population data on Oct. 30, according to Faviola Medina, city clerk services manager.

The city can release draft maps on Nov. 21, although the public can draw or finish draft maps through December. From January through March 2022, the city will hold at least two additional public meetings before adopting the final map by the statutory deadline on April 17, 2022, Medina said.

In 2017, the city of Carlsbad, along with many other cities across the state (including Encinitas and Solana Beach), received a letter from a Malibu-based law firm claiming each city’s at-large elections violated the California Voting Rights Act.

Avoiding costly litigation, the city approved its first district map for council members on May 9, 2017.

The map broke the city into four districts — mayor remains a citywide position — with each district consisting of coastline, Interstate 5, business districts and bordering a neighboring city. Currently, the representatives are Schumacher (District 1), Blackburn (D2), Bhat-Patel (D3) and Acosta (D4).

Schumacher and Bhat-Patel’s seats are up in 2022, although Bhat-Patel would not run for council if she finished second or higher in her bid for the California State Senate 36th District seat to replace a termed-out Sen. Pat Bates (R-Laguna Niguel).