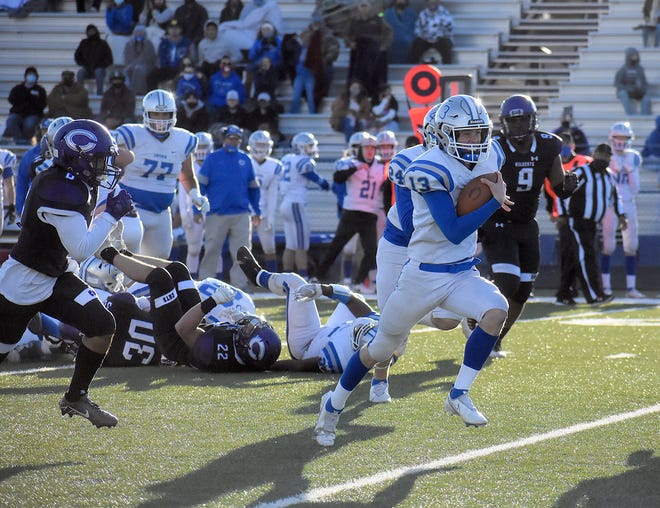 The 2021 football Spring season has come to an end in New Mexico. The Carlsbad Cavemen (2-3) were able to defeat both rival Artesia and Hobbs in back-to-back seasons and believe they have found the building blocks for the next several years of the team.

The Cavemen had a relatively small senior class. After graduating more than 20 seniors in both the 2018 and 2019 seasons only 10 seniors played on this year’s team. Cavemen head coach Gary Bradley gave his juniors and sophomores plenty of chances to make plays on both sides of the ball and they responded with leading the team in nearly every category.

Here’s who led the Cavemen in each category and the other top stat leaders in this COVID-19 pandemic shortened season.

Under Gary Bradley the running game has been Carlsbad’s strength. Five Cavemen recorded at least 100 rushing yards and six Carlsbad players scored a rushing touchdown. As a team Carlsbad averaged 217 yards a game on the ground.

Junior Jesse Rodriguez only played in the first two games for Carlsbad but ended up leading the Cavemen in rushing with 293 yards. He was one of four Cavemen to score two rushing touchdowns.

Junior Amorian Barnes was the other Caveman to rush for at least 200 yards. Barnes carried the ball 41 times and finished with 234 yards and two scores. Sophomore Uriel Mendoza finished with 33 carries, 151 yards and two touchdowns including the game-winning one against Hobbs with seconds left on the clock.

Carlsbad senior Kyle Ramirez added 212 receiving yards off 12 catches and scored the other two receiving touchdowns of the season to round out the double-digit catching players for the Cavemen.

Sophomore Saul Ramirez led Carlsbad in both total tackles (32) and assisted tackles (24) in his four games. Ramirez also had one tackle for loss.

Senior Kody Daniell finished with 26 total tackles and recorded one interception, one forced fumble and a fumble recovery in his four games.

Sophomore Austin Blair forced two fumbles against Hobbs and led the Cavemen with three tackles for losses. He was one of two Cavemen to score a defensive touchdown, the other Caveman to do so was sophomore DJ Moore.