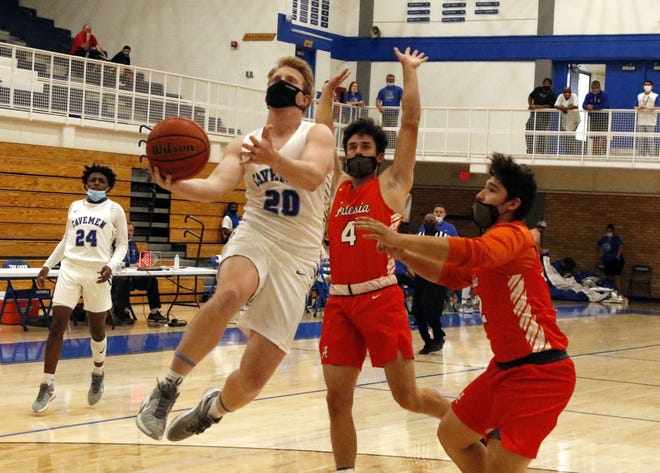 The Carlsbad Cavemen and Artesia Bulldogs will have at least one more basketball game left to play, as both earned bids in their respective state tournament brackets.

The Carlsbad Cavemen, the No. 7 seed in 5A, look to win the season series against Roswell, the No. 2 seed in 5A, when the two sides square off in the 5A quarterfinals at the Coyote Den.

The Artesia Bulldogs earned the No. 2 seed in 4A and will host No. 7 Silver in the 4A quarterfinals.

Both games are scheduled for Tuesday.

Carlsbad spent the first half of the season with an incomplete roster. Several players missed the two Artesia games because they were still playing football. When those players returned, four more had to quarantine for several games.

The Cavemen began district play at 0-2, including a 63-60 overtime home loss to Roswell when the team still had a shorthanded bench. That loss was the last time Carlsbad had an incomplete roster, and the Cavemen now enter the playoffs on a five-game win streak.

More:Cavemen fall to No. 2 Roswell Coyotes in OT

Cavemen head coach John Zumbrun continuously asked if there were any teams who wanted to play Carlsbad at full strength.

Good question, because Carlsbad outscored its opponents 270-197 during its win streak — including a 59-43 road win at Roswell.

“Roswell knows us and we know them,” Zumbrun said. “It’s going to come down to who executes best. We have to stop Taymon Burrola who’s probably the best player in our district who’s averaging 30 points a game. They have some other good shooters and athletic kids who can get a lot of boards. It’s going to be a tough matchup. It will be a lot different than when we played them last time.”

Artesia started the season slow at 1-2, falling to Hobbs and Carlsbad.

Artesia avenged its loss to Carlsbad before falling to Roswell.

Artesia enters the 4A playoffs on a six-game win streak.

“We’re excited that the state tournament comes through Artesia,” Bulldogs head coach Michael Mondragon said. “We’re ready and anxious to get back to work. Our guys are enjoying the regular season district championship and prom tonight but on Sunday we’ll get to work and watch film. These guys are still upset over (the 2020 quarterfinals loss) that Hope Christian game. The last 13 months I know we’ve worked harder than anybody else in the state and we’re ready to reap the benefits.”

State quarterfinal and semifinal matchups will be held at either the higher seed’s location or a neutral site, depending on travel distance.