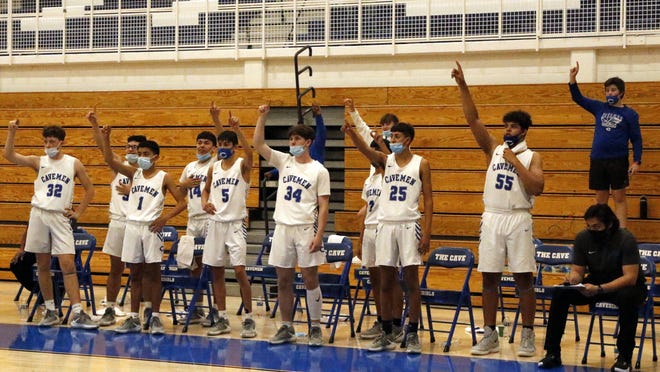 The 2021 Carlsbad Cavemen basketball team will unfortunately always be asking themselves what could have been for this season. Just like their female counterparts Carlsbad’s season came to an end because of a COVID-19 outbreak amongst the team.

More:Carlsbad Cavemen out of 2021 basketball playoffs due to COVID-19, Artesia Bulldogs qualify

With it’s roster at full strength Carlsbad won its last four district games to qualify for the 5A playoffs and was scheduled to face No. 2 Roswell, a team the Cavemen had just beaten earlier in the week, 59-43. The outbreak forced a Carlsbad forfeit and gave Roswell a bye into the 5A semifinals.

The forfeit in the tournament gave Carlsbad an 8-4 record officially although the team only played in 11 games. Five Cavemen played in all 11 games.

With two COVID-19 outbreaks in the season and the football team finishing its season as basketball began head coach John Zumbrun played with a short bench in the start of the season and had eight Cavemen play at least nine games. Here’s what they did this season.

Miller was named to the District 4-5A All-District First Team. The senior played the second-most minutes with 317 and led the Cavemen as the floor general. He was second on the team with 113 points. Miller added 35 rebounds, led the team with 32 assists, 19 steals and four deflections. He was 17-for-52 (32.7 percent) from distance and was 24-for-36 (66.7 percent) from the free throw line to average 10.3 points a game.

The sophomore was also named to the District 4-5A All-District First Team. Perez led Carlsbad in scoring, rebounds, blocks and minutes played, averaging 12.3 points, 7.2 rebounds with 19 total blocks and played 343 minutes to average 31 minutes a game and added 13 assists.

The senior was limited to just 73 total minutes on the court but recorded 14 rebounds, 10 points, five assists, five steals and three deflections.

The senior was named to the All-District Second Team. Parent scored 58 points to average 6.4 a game. He added 26 rebounds and five assists.

The sophomore center scored 50 points to average 5.6 a game. Gonzalez had two steals, two pass deflections and one block on the season.