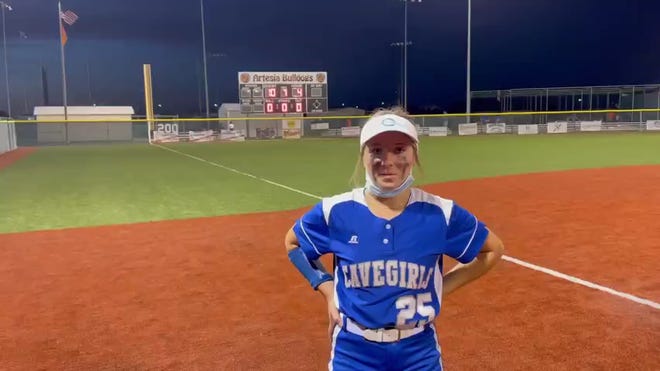 ARTESIA – The Carlsbad Cavegirls gave starting pitcher Faith Aragon a gift she never would have gotten had it not been for the COVID-19 pandemic: A win against rival Artesia on her Sweet 16th birthday.

Both Artesia and Carlsbad have ended each other’s perfect seasons and with Carlsbad’s 10-4 win on Tuesday night that signaled the end of non-district play.

In a normal season the softball season would have ended last weekend but the later start allowed Aragon to show her improvements from the previous outing against Artesia to cap off her birthday with a good showing both in the circle and in the batter’s box.

Artesia head coach Sandra Pulido wanted to give her underclassmen some time on the diamond and started freshman Madison Martinez as pitcher rather than junior RyLee Crandall, the pitcher Cavegirls head coach John Tigert said he has his team preparing for all week.

The slower pitching speed by Martinez caught Carlsbad off-guard for a bit but the Cavegirls were able to adjust their hitting approach and forced Artesia to go through three pitchers, including Crandall to come in when Carlsbad already had a comfortable six-run lead.

Once again Faith Aragon took the pitcher’s circle for the Cavegirls against Artesia. In the previous game between these teams Aragon struggled with her control and ended up walking six Lady Bulldogs. This time Aragon had no such issues and didn’t issue a single walk.

Carlsbad’s (6-1) bats were active from the very start. The Cavegirls recorded 13 hits and scored in every inning except the fifth and seventh. Last time against Artesia (7-1) Carlsbad picked up a nine hits but couldn’t translate most of them into runs. 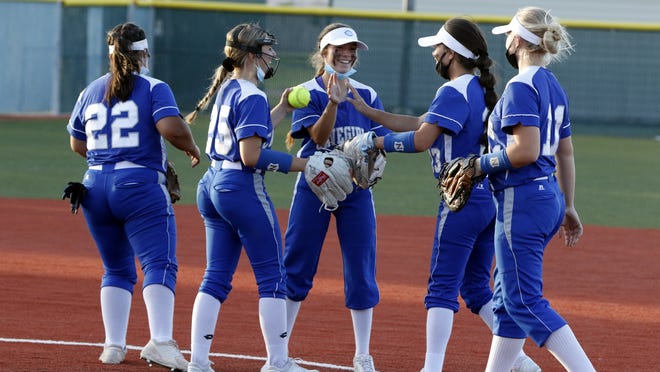 The top of the second inning. Carlsbad trailed Artesia, 2-1 to start the inning. The Cavegirls committed two fielding errors in the first inning which would have kept the Lady Bulldogs off the scoreboard.

With one out in the second inning junior Maura Florez started the offensive onslaught with a single to centerfield. Haiven Schoolcraft and Madison Loera each singled to load up the bases. Carlsbad tied the game on the next batter when Faith Aragon drew a walk.

The Cavegirls then retook the lead and never looked back the following batter when Hannah Martinez hit a two-run single to score Schoolcraft and Loera. Johnna Aragon added two more runs for Carlsbad with a double to end the inning with Carlsbad up, 6-2.

Carlsbad made sure Artesia couldn’t come back from this one after Jessica Munro hit a no-doubt two-run homer over the centerfield wall to give Carlsbad it’s 10-4 lead.

“We were ready for (RyLee Crandall). When they threw the slower stuff at us we had people striking out at the start. We did what we had to do and adjust. Artesia’s the top team in 4A and that win will help us when they do seeding. Faith did a great job tonight. They key tonight is she didn’t walk anyone when she had six the last time (against Artesia).”

“Going into this game I wanted to give our younger girls an opportunity to see where they are and what they can do against a team of this caliber. We don’t like to think about it but RyLee’s not going to be here forever. We still have this year and next year but we have to make sure the rest of the girls are ready if they have to go into a big game save during state or a big game during district. It’s a growth thing because they won’t be able to handle this type of pressure if they’re never in these situations.”

Carlsbad begins district play against Roswell. The Cavegirls travel to Roswell to face the Lady Coyotes on June 3 in a doubleheader and return to Carlsbad to host Hobbs on June 8.

Artesia travels to Portales to face the Lady Rams in its district opener on Saturday. The Lady Bulldogs return home to host Goddard on June 1.