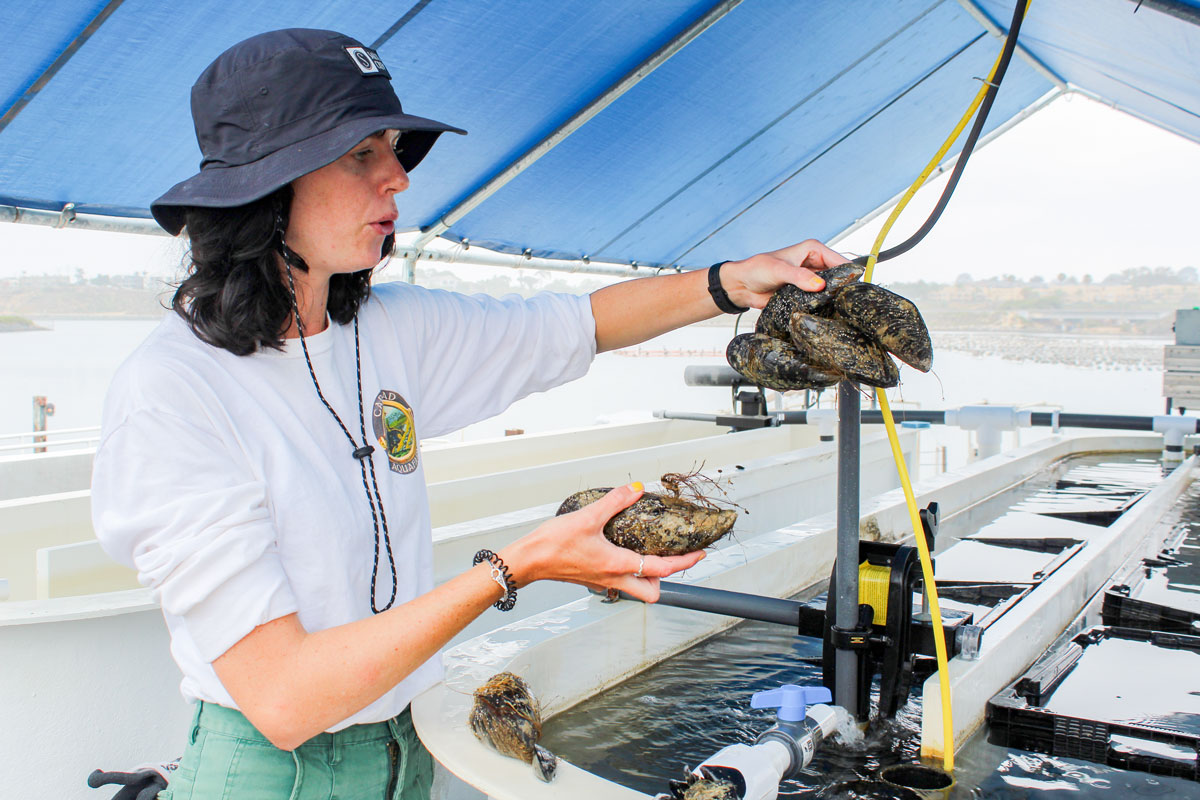 CARLSBAD — One of the city’s iconic farms has quietly reopened to the public.

The Carlsbad Aquafarm, a staple in the city since the 1970s, has finally opened its doors for tours, shucking classes and oyster tastings.

Nestled slightly to the north of the decommissioned Encina Power Station on Agua Hedionda Lagoon, the aquafarm raises more than 2.5 million oysters and muscles annually, while also playing a niche role for the Carlsbad Desalination Plant, according to Rachael Taylor.

The farm, located at 4600 Carlsbad Boulevard, opened to the public in April, she said, after receiving permission from NRG Energy, which owns the land. Taylor said the farm was closed to the public because of security concerns with the former power plant, which is a critical infrastructure.

“We have four tours a day with up to 12 people for each tour,” she said.

Thomas Grimm took over ownership years ago, but the farm’s origins date back to the 1960s. Due to a foul smell from the lagoon, a scientist from San Diego State University began a research project on farming the waters and the smell.

Once the oyster was introduced, a noticeable reduction took place and led to the beginning of an oyster farm in the 1970s. Additionally, Grimm said oyster shells are a benefit to the environment, locking up carbon dioxide for 10,000 years, compared to shorter lifespans for trees.

As for the connection to the desalination plant, Taylor said during an Aug. 5 tour the oysters begin the filtering process of the saltwater near the intake pumps.

Since oysters naturally feed on phytoplankton and algae, they’ve helped clear the water allowing for eelgrass and other marine life to thrive in the lagoon, in addition to prepping the water for the desalination plant, Taylor said.

“Eelgrass is the natural habitat for baby fish, giving them space to hide from predators,” Grimm said. “With the abundance of eelgrass, Agua Hedionda is rich with diverse marine life. In addition to promoting the growth of eelgrass, oysters and mussels act as a natural reef protecting the shoreline and providing nesting material for several species of protected birds.”

As for the tour, Taylor gives guests a step-by-step account of how the process operates. The farm starts with securing “baby” oysters and muscles, which are microscopic Taylor said, and nursing them until they are ready to be placed in the lagoon.

Marina Carranza and Yvonne Marquez, oyster lovers from Long Beach, took the tour on Aug. 5 said it was a great time. The tours run between 60 and 90 minutes, and Carranza quickly picked up her shucking technique.

“I googled ‘best place to eater oysters,’ saw it on Yelp and saw it was a farm,” Carranza said. “I thought it was great. I didn’t know the cycle of life for an oyster … how intricate of how they’re grown.”

Being “filter feeders,” the young shellfish have 50 gallons of saltwater pumped through their stations. From there, the thousands of oysters are placed in a “float” in the lagoon using a suspension system dropping down 15 feet, Taylor explained.

The lagoon is about 45 feet deep, so the oysters are protected from sea urchins, starfish and other predators on the ground. However, hundreds of pelicans provide air support from fish, thus allowing the oysters to grow until they’re ready to go to market, Taylor said.

The farm harvests two species — Carlsbad Blondes and King Tide — which can grow between 2.5 inches to 4.5 inches long. With the specialized process and warmer water, the Carlsbad Aquafarm can harvest its oysters anywhere between eight and 10 months, Taylor and Grimm said.

As for the mussels, they are placed on ropes near the floats as they need something to latch onto to grow, Taylor said. Similar to oysters, mussels take solace in the protection provided by pelicans.

The last stop before market, though, the oysters are brought to an onshore facility where they are feed filtered saltwater to enhance their taste. Taylor said it’s a noticeable difference from farms in Northern California and the East Coast.

“Our look different because of how they are grown and fed,” she explained. “Our final step ‘cleans’ the oysters.”

The farm sells to a number of local restaurants, such as King’s Fish House, Bluewater Grill and Top Choice Fish Market, while also selling to a number of Whole Foods locations.

The farm also provides a daily pick-up option from 9 a.m. to 5 p.m. for locals with a two-hour buffer after placing the order.