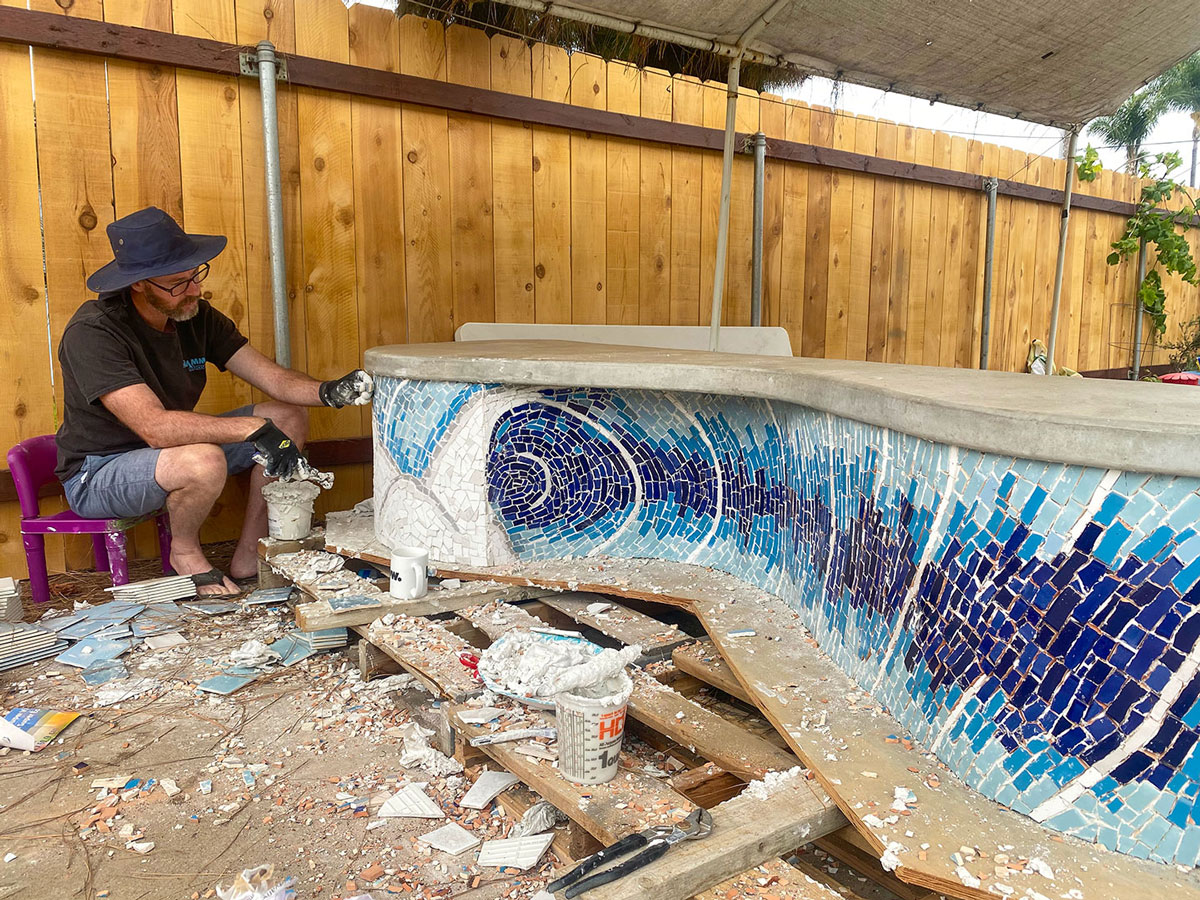 CARLSBAD — After the tragic death of Jack Munday, his family set out in search of a creative way to celebrate and remember Jack’s life. A phone call to local Carlsbad artist Bryan Snyder resulted in many conversations over the next year.

Snyder learned Jack’s story and presented a number of creative options including bike racks, murals and sculptures—ultimately deciding on a creative bench reflecting the colors and the organic form of a wave.

Snyder sourced local mason Jeff Vaughn who shared the team’s excitement of producing something creative. Vaughn, Snyder and the Munday family began sharing ideas around March 2021. By the beginning of April, the team finalized the bench design concept and Vaughn began cement production.

“It’s made out of concrete and steel and formed with masonite,” Vaughn explained. “It’s all one uniform piece of concrete with some foam blocks to reduce the weight.”

While Vaughn continued the masonry production through April, Snyder began his research on mosaic art production. He met with a variety of ceramic tile and glass artists to learn the media options since he had never worked in mosaic art form prior to this memorial.

Ultimately, he chose ceramic tile as the medium and began sourcing materials from local manufactures and retailers, as well as shipments from Mexico.

“My biggest hurdle was the learning process,” Snyder said. I had absolutely no experience in mosaic art. I didn’t know if I was going to use glass or ceramic, where to get supplies, what tools to use, how to cut, adhere and grout. Luckily, I have a hunger for learning. After three weeks of online research, meetings with multiple ceramic and glass artists and many visits to local manufactures, I jump in.”

Creating the illusion of a curved surface was important to Snyder. To help envision the best way to accomplish this, Snyder created a miniature model. By painting the model, he learned how to angle the tile pieces and arrange the blue values, to create the desired illusion.

“The tile color arrangement was important, but I quickly learned the angles of the tiles were crucial in creating the illusion, Snyder said. “The tile angle on the wave’s right side shoulder angle to the right. As your eyes move to the middle of the bench, you will notice the tiles rotate to a vertical angle. Moving toward the left into the wave’s barrel, the tiles continue angling to the left following the contour of the wave. I also experimented with the size of the ceramic pieces. Your eye is drawn deep into the barrel by the smaller pieces which create a sense of depth.”

The bench was delivered on June 7 to Snyder’s Carlsbad Village studio where he would spend the next 45 days hand-cutting and adhering hundreds of ceramic tile pieces to the curvy front wall of the bench.

On August 7, 2021, Jack’s finished public art memorial bench was installed on the north shore of the Agua Hedionda Lagoon’s west basin. A gathering of 50+ family and friends celebrated the unveiling.

Thank you to everyone who shared your mosaic knowledge. Without your guidance, this would not have been possible.

A special thanks to Jeff Vaughn for pushing yourself and producing a masterpiece, to Lisa and Samantha from the Agua Hedionda Lagoon Foundation for helping source the perfect location, and to the Munday family for entrusting us to create your vision for Jack.

This article was first published by Carlsbadcrawl.com. A video of the making of the bench can be viewed here.