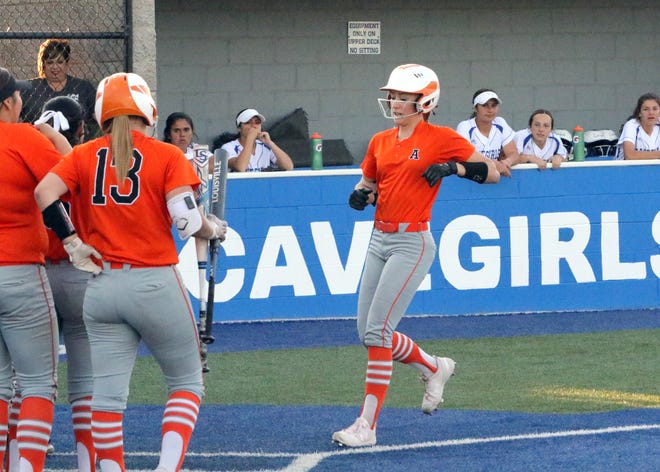 The Artesia Lady Bulldogs and Carlsbad Cavegirls showed southeast New Mexico is still a hotbed for some of the best high school softball in the state after Friday’s 4-2 extra inning game that went in favor of the visiting Lady Bulldogs.

The Artesia Lady Bulldogs ended their 2019 season repeating as 4A state champions in softball while the Carlsbad Cavegirls finished in second place for the 5A crown. With COVID-19 canceling last season, both teams knew when they met up in 2021 the games would go a long way to predict the rest of the season.

In the 735 days since the Cavegirls played a varsity softball game at home, neither Artesia (5-0) nor Carlsbad (3-1) looked like they had missed a step. Coming into this game Carlsbad and Artesia had each three mercy-rule victories, outscoring their opponents a combined 99-2. Now against top-tier talent, both teams knew this game wouldn’t be easily won.

In the circle for Artesia was junior RyLee Crandall, a Baylor commit who Cavegirls head coach John Tigert said is “probably the best pitcher in the state now” against Carlsbad sophomore Faith Aragon. The two pitchers lasted all eight innings and each exhibited their strengths.

Carlsbad out-hit Artesia 9-4 and Aragon had a 13-9 edge in strikeouts against Crandall, but Crandall only walked one batter while Aragon walked six batters with two coming in the eighth inning that would be the difference in the game.

In the top of the eighth inning Artesia had the bases loaded with one out. Aragon struck out Kenna Morrison to keep all the runners on base and looked to tightrope out of the inning without giving up a run.

The next batter, Mikenzi Carlo, was walked which scored Presley Skinner from third and put Artesia up, 3-2. Aragon then hit Makaylee Morillon to score Perseis Aguilar and give the Lady Bulldogs a 4-2 lead.

Carlsbad had already trailed Artesia by two runs earlier in the game and was able to tie it up with RBIs by Johnna Aragon in the fourth and sixth innings, but didn’t have an answer this time in the bottom of the eighth. Crandall struck out two of her nine Cavegirls in the inning to preserve the win and keep Artesia undefeated early in the season.

Both head coaches were proud of how their teams played and knew this series would go a long way towards seeing if one or both teams could raise a Blue Trophy in June.

“It wasn’t until we played this game that I thought we had a shot to get to the state championship game again,” Tigert said. “We had chances to win this game with nine hits but couldn’t hit with players in key positions. Artesia’s a very good team and they have a shot to repeat as champions with their pitching.”

Four Lady Bulldogs recorded a single hit each with Makaylee Morillon getting a double and two RBIs. Crandall hit a home run in the top of the third inning to start the scoring. Kenzi Carlo and Perseis Aguilar each recorded the other hits for Artesia.

“We’re proud of every single girl. This was a great team win. It wasn’t just one person that made it happen,” Sandra Pulido said of her Lady Bulldogs. “They had to play together offensively and defensively. We talk about execution a lot. We can call plays and know what the other team is doing but we have to follow through to make it work.”

The two teams will match up again on May 21 in Artesia before district play begins. Carlsbad stays at home and will host Lovington Tuesday at 6 p.m. while Artesia returns home to host Roswell on Friday at 6:30 p.m.