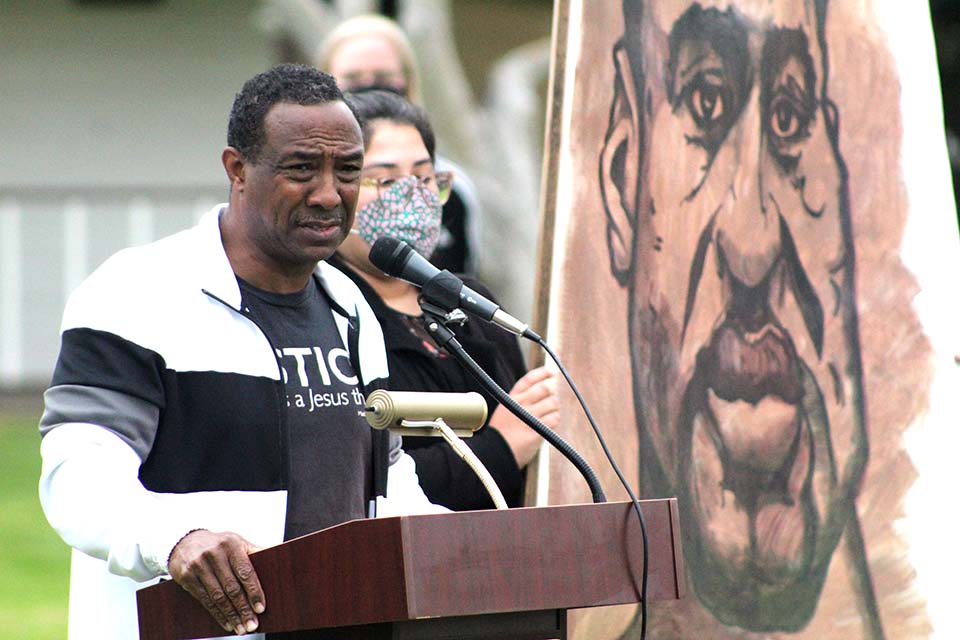 CARLSBAD — In the wake of a Minnesota jury finding Derek Chauvin guilty of murdering George Floyd, nearly 100 people gathered April 23 in Magee Park for a vigil in Floyd’s honor.

Organized by the Carlsbad Equality Coalition, a number of speakers gave poignant and passionate speeches about the case, verdict, their own experiences and how there’s a “glimmer” of hope for those victimized by police brutality.

Keyrollos Ibrahim, co-founder and president of the CEC, told the audience about his experiences with police encounters while being raised in Carlsbad. Some were good, but he said there were at least a dozen instances where he was racially profiled.

“We saw accountability, but not justice,” Ibrahim said. “If it were justice, he’d be alive.”

Rev. Madison Shockley of Pilgrim United Church of Christ, meanwhile, delivered a powerful speech about the Chauvin trial and his reaction to the verdict. Chauvin was found guilty of unintentional second-degree murder, third-degree murder and second-degree manslaughter.

Shockley began his speech after the crowd spent 9 minutes, 29 seconds kneeling, an act symbolizing solidarity with Floyd, who died after having his neck pinned by Chauvin’s knee for that amount of time.

While somewhat pleased with the trial and verdict, Shockley said there’s more work to be done. The result of one trial, he said, is not the answer to the systemic problem of police shootings and the killing of Black people such as Breonna Taylor and many others.

Shockley said it is critical for all people to work together to lift the marginalized out of repressive situations. He said one the biggest issues is the “depraved indifference” in the country for centuries, but the millions are working to build justice for everyone to live in a “world where you don’t draw a gun over $20.”

“If Black lives don’t matter, what does that say about you?” Shockley asked the crowd. “Justice was done in the trial verdict. We can now call it a murder. For once, it was determined this behavior was not police procedure.”

Enrique Morones, who founded Border Angels in 1986 in Carlsbad, also spoke about injustices and inhumane treatment of people of color. He has spent decades helping immigrants and promoting fair treatment for those crossing the border.

Morones also spoke of Taylor, a young Black emergency medical technician, who was killed in March 2020 when police in Louisville, Kentucky, burst into her home and fired 32 rounds. Police used a no-knock warrant on suspicion that Taylor was involved with drug traffickers.

Morones said tragedies like these are too common and society must rally together to acknowledge and stop racism, police shootings and brutality.

“We are all the same race, the human race,” he said. “This moment will pass, but we can’t let up.”

Other speakers included Carlsbad Councilwomen Priya Bhat-Patel and Teresa Acosta, along with Vista Unified School District Trustee Cipriano Vargas. Collectively, they said the issues of systemic racism also falls at the feet of elected leaders, who must listen and act to weed out bad actors and promote equity and equality for all.