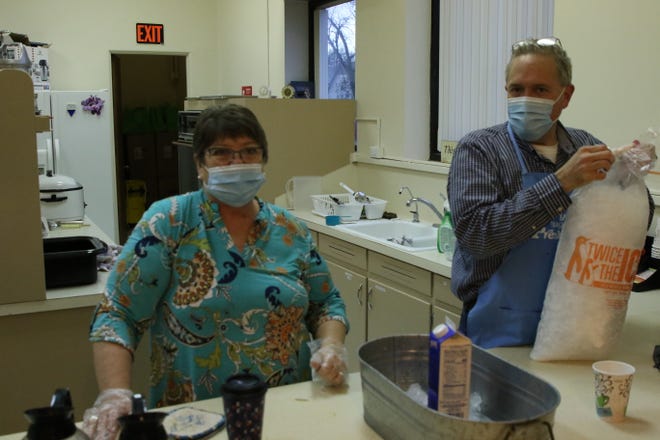 Loosening COVID-19 restrictions in Eddy County meant numerous local events were allowed to resume after a year of virtual gatherings or outright cancellations.

Eddy County was one of 24 counties across New Mexico to move to the Turquoise category on Friday after the State of New Mexico updated key health metrics used to assign risk levels to counties under the Red-Yellow-Green COVID-19 framework now in effect, read a news release from the Office of Gov. Michelle Lujan Grisham.

Turquoise is assigned to counties with the lowest risk of infections, and brings with it the least restrictive policies.

Lower risk meant communities throughout the counties were allowed to resume local events as restrictions on public gatherings were relaxed.

Last year, COVID-19 wiped out a longstanding Eddy County breakfast and organizers were not sure if it would happen this year.

“It’s not consecutive if you count last year. We couldn’t have it (the 108th breakfast) because of COVID-19. We’re just kind of ignoring that one,” he said.

Phelps said church members were cautious when it came to this year’s breakfast after Eddy County went back to Turquoise Friday following Lujan Grisham’s announcement Wednesday that COVID-19 health orders in New Mexico would be relaxed.

Prior to Wednesday’s announcement, Eddy County was in the Yellow.

“We’re thankful were open in terms for back to Turquoise, so we do have some dining in, and some folks are enjoying that and that’s awesome,” he said.

The color-coded framework now includes a criterion that benefits counties as their vaccination rates improve, incorporating an essential new metric that reflects increasing vaccination rates in counties all across the state as more supply becomes available, per the release.

New Mexico Human Services Department Secretary Dr. David Scrase said the intention always made sure that the color coding of the map and associated requirements for each county continue to match actual risk levels on the ground in each county.

“As our models show test positivity is likely to become more elastic over time, and as fewer New Mexicans will require COVID-19 testing amid increasing vaccinations, we want to provide counties the assurance that they can continue to progress in accordance with the actual risk they face,” he said.

Before Friday’s breakfast, Phelps said the church kept an eye on the calendar and updates from the State on COVID-19 happenings before implementing plans before Friday’s event.

“As it started to come, we thought we were just going try it. We thought we were going to have seating outside. Thank goodness, although the rain (Friday) stopped. It’s been raining. We’re thankful we were able to have it inside,” he said.

Effective Friday, the health metrics used to determine a county’s risk level were:

Prior to the recent change in criteria, risk status was reevaluated every two weeks.

Previously, the health metrics were more restrictive; the new per-capita case rate was 8 per 100,000 inhabitants and the average new positivity rate was 5 percent. Vaccination rates were not part of the equation.

Carlsbad Mayor Dale Janway said Eddy County’s risk was lessening as the positivity rate was 2.81 percent and the reported cases per 100,000 were 9.10.

“While it’s certainly past time to move forward and end restrictions, this week’s changes were a step in the right direction. Returning to Turquoise immediately meant that people will get to attend high school basketball games and middle school dances this weekend,” he said.

Janway said people do need to remember that a new map will be published again Wednesday.

“So we need to keep our COVID numbers down and continue to work on providing vaccines to those who want them,” he said.

Thursday a man in his 70s died and was hospitalized. A woman in her 80s died Wednesday and had underlying medical conditions, read a DOH news release.

The number of deaths in Eddy County rose to 129 on Thursday, DOH said.

A total of 37 new COVID-19 cases were reported in Eddy County from last weekend until Thursday. As of Friday morning, DOH said 72,563 people in Eddy County were tested.

DOH cited 6,794 total tests in Eddy County as of Friday morning and 6,385 recovered.

Per DOH data, the numbers drop as Eddy County’s population ages. The numbers fell to 78 for those 90 and older.