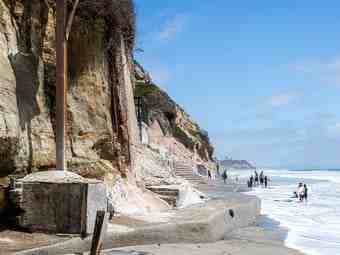 ENCINITAS, CA — An existing historic landslide reignited Sunday night or Monday morning at Beacons Beach in Encinitas, according to the city.

“Out of an abundance of caution, the city’s geotechnical and engineering staff will monitor and assess the area of ​​the landslide for potential future instability over the next 30 to 90 days,” a city news release said. “Effective immediately, the parking lot and beach access trail will be temporarily closed to all individuals until further notice.”

The coastal bluff at Beacons Beach has experienced episodic instability associated with a major historic landslide, according to the city. The movement of the landslide damaged the previous beach access stairs during the winter storms of 1982 and 1983. Since then, beachgoers have accessed the beach via a zigzag path leading down from a public parking lot along the west side of Neptune Avenue.

“Residents and visitors who typically access the beach via the switchback trail are prohibited from using the trail until landslide monitoring is complete and access is again granted by the City of Encinitas,” the statement said. “Bathers are encouraged to use the Stonesteps or Grandview beach access until the Beacons trail reopens.”