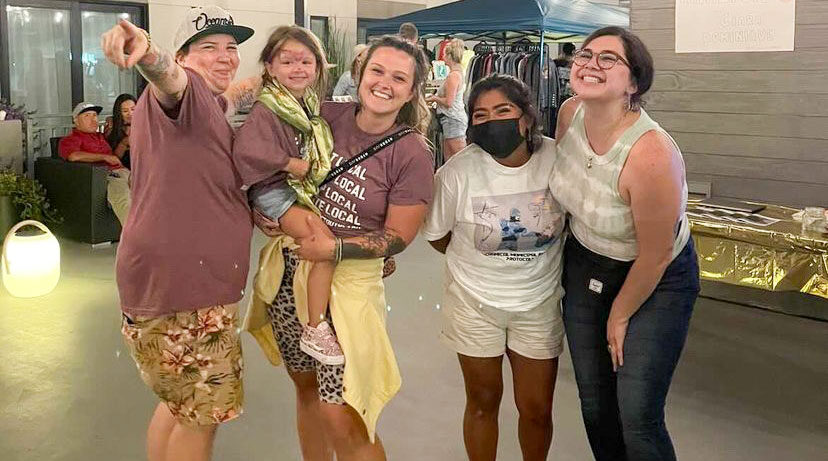 OCEANSIDE — A group of community activists has come together to simultaneously promote local businesses and help the city’s houseless population.

The goal of the market, according to Sunny Soto, is to create a safe and inclusive space for small businesses to feel comfortable selling their goods and to help them grow.

Soto is behind Sunny Street Outreach Movement, a small organization dedicated to providing hot meals and raising funds for the city’s houseless.

Earlier in July, the movement donated a $100 gas card to a couple living in their RV who frequently must move to comply with the city’s RV laws. Soto also cooks and provides meals as part of the movement’s efforts.

“It’s everywhere no matter how much you want to look past it,” Soto said.

Soto teamed up with Alma Rodriguez, of Bajo Un Solo Sol, and Jasmine Venegas, of En Mi Palma, two organizers with their own activist groups striving to help the city’s houseless, to create Mutual Aid Markets. All of the proceeds from the market’s vendor applications and fundraising raffle are going toward funding the activists’ efforts to help houseless people.

“We all have the same goal and want the same thing,” Rodriguez said.

Rodriguez founded Bajo Un Solo Sol in 2020 after seeing a need for change in the community.

The group host workshops on various current topics including treatment of homeless individuals by the city and defunding the police. Last year, the group organized the “Fight for Liberation Caravan,” which protested the Fourth of July as a means to acknowledge that people of color still face racism in this country.

Over the last several months, the group has devoted much of its efforts to help the city’s houseless through mobile meal distribution to RVs and individuals staying near Brother Benno’s and the transit center as well as deeper into the valley region where transportation to brick-and-mortar homeless services are hard to reach.

“They can’t walk four miles for a meal,” Rodriguez said.

Bajo Un Solo Sol also helped cook meals and provide items like tents, trash bags and other supplies for those staying in the “Camp On Wheels” homeless encampment on South Oceanside Boulevard earlier this year.

Venegas is behind En Mi Palma, another local group striving to help the city’s homeless with meal distribution and other resources. The group also makes and sells jewelry, the proceeds of which go toward helping those in need.

“I grew up going to Brother Benno’s and I know how that helped me,” Venegas said. “I wanted to be the help that I got.”

After a successful first run, the group planning to host more Mutual Aid Markets around Oceanside and potentially nearby cities like Vista and Carlsbad.

For more information on upcoming markets, visit @mutualaidmarkets on Instagram.