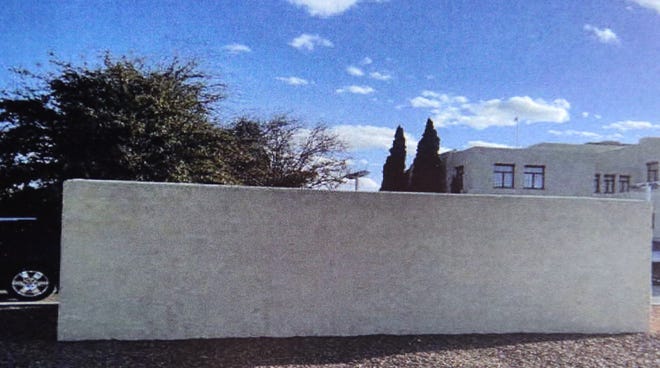 A bare wall at the Eddy County Courthouse in Carlsbad will have new purpose in the near future.

Tuesday, Eddy County Board of Commissioners approved the installation of a mural welcoming visitors to Carlsbad and Eddy County as part of a project undertaken by the Pearl of the Pecos Arts and Cultural District, read a presentation from Kathleen Davis, director, to commissioners.

In a memo to commissioners, Kathleen Davis said the mural could bring more tourism “and traffic to the County and Carlsbad downtown district.”

“Mural and art tourism are both thriving sectors of tourism gaining more and more traction in recent years,” she wrote in the memo.

“Murals have the opportunity to tell the community’s story.”

In the memo, she cited the objective of the mural in the Downtown and Cultural District is to establish the boundaries of the district, beautify and deter littering, increase foot traffic and become an economic driver for business in the district.

“By beautifying our arts and cultural district, visitors to the area will be inclined to stay in town for longer periods of time and not only see our natural tourist destinations, but also visit the downtown district to appreciate the art, beauty, and unique story our murals will tell,” per the memo.

She said the murals will follow themes of Eddy County, Carlsbad, or state of New Mexico, local history; character, architecture, or uniqueness. Other themes may be identified on a project-by-project basis subject to building owner.

Kathleen Davis commissioned artist Michael Fish to do the work, which would have images of the Flumes, Living Desert Zoo and Gardens State Park and Lake Carlsbad’s beach area.

Murals undertaken in other parts of New Mexico proved successful, according to Davis.

“In 2019, the Ruidoso Midtown Association launched their mural project competition. I have spoken to the Executive Director, Matt Ingram, he said the success of this project was a lot more than he anticipated,” the memo read.

“Not only did foot traffic increase in the area, but Matt also said it was a huge economic driver for the businesses in which the murals were painted on.”

She said some other communities in New Mexico with mural projects are Las Cruces, Albuquerque, Taos, Gallup, Silver City and Santa Fe. Lovington is launching one that will be completed this summer.

“I think it’s a great idea. I think it has all the affects that you say it has,” he said.