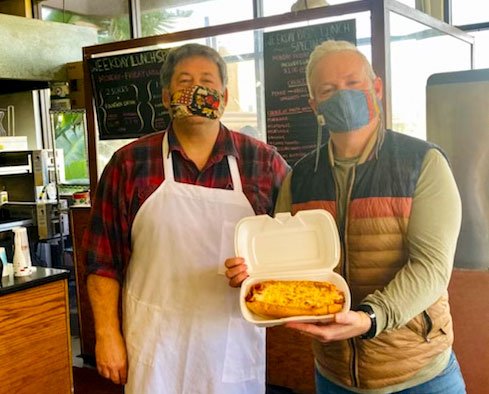 Please indulge me as I provide a brief backstory on this week’s column. I grew up next door to Jim Klemmer in Royal Oak, Michigan, where we both developed an early interest in surfing – an odd place for that to happen.

That led us both to Encinitas and enabled our friendship to continue, riding the waves we only dreamed about in Michigan. Jim landed in Encinitas before I did and ended up living in one of the iconic boathouses on Third Street.

My first visits had me sleeping on the floor of the sparsely furnished SS Encinitas but realizing that this was where I needed to be. By that time Jim was managing Leucadia Pizzeria on the corner of Encinitas Boulevard and Coast Highway 101. His idyllic world (to me anyway) consisted of living in the boathouse community with other restaurant pirate types, Leucadia Pizzeria, The Saloon and surfing The Boneyard.

As a young corporate type, I envied the simplicity of his life. One of the highlights was when our idol, the late surf writer Gary Taylor from The Coast News interviewed me for a story on Great Lakes surfing over pizza and beers served up by Jim. When our story came out, we had been validated as freshwater surfers by the local king, we had arrived.

Over the past 30 years or so, it’s always been difficult for us to get our schedules to sync up. Jim’s life has revolved around restaurant hours, the past 19 as owner-operator of Palomar Pizza & Pasta.  That all changed recently, and I thought it worthy of letting Jim tell his story.

LTP: Tell me about your first restaurant gig.

Jim: My first restaurant job was at a Pizza Hut at 16. My sister was a waitress there and got me in. I was pretty green with zero work experience. The most memorable restaurant job I had in high school was at a sub shop in Royal Oak called Tubby’s Submarines. It was the first job I had that was actually fun.

LTP: Where was your first restaurant job in Encinitas?

Jim: That would be the old Kansas City BBQ. It was hard work but with a very simple menu. Just ribs, chicken and a few side dishes.

LTP: What was it like working then managing Leucadia Pizzeria?

Jim: That’s where I really learned the basic operations of a very busy, very successful restaurant. I started as a cook, and after a freak accident, I was promoted to manager. It was a great place to work but the place was a pressure cooker. We had 20 drivers on a Friday night and that alone was extremely stressful, kind of like air traffic control. In addition to the delivery chaos, we would normally have a jammed-packed dining room.

So, I had to not only deal with the kitchen and delivery driver madness, I had to manage the front of the house as well. Dealing with angry customers, feuding waitresses, stoned surfer dude busboys and crying hostesses.

But overall, the experience at Leucadia Pizza was great, and the owners, Chip and Linda Conover, were a great family to work for. No regrets.

LTP: Was there a point when you realized this was your career path?

Jim: It was not until I was well committed to opening my own shop in 2001, that I realized that this would be my life’s work. Before I had time to really think about what I was doing, I was already in deep. No going back. Most of my jobs up to that point were in restaurants, and I always told myself with each new restaurant gig, that this would be my last one.

So what do I do? I open up Palomar Pizza. Go figure. It happened when of my co-managers at Leucadia Pizzeria, Brooks Cohen was let go and it was then we both started talking about running our own places.

This was at a time in my life when me and my wife Sheri had just purchased our first home, got married, and had a baby on the way. Might as well throw a restaurant into the mix.  In October of 2002, we signed our lives away with the retail space lease and SBA loan.

The owners of Leucadia Pizza found out, so they promptly fired me and Sheri who was a waitress at the time. It was a conflict-of-interest situation and I totally understood. However, with a new wife, new house, new business and a baby on the way, and with no income, it was a bit stressful.

LTP: Tell me about the location and concept for Palomar Pizza?

Jim: We chose the location of Palomar Pizza because of its proximity to business parks in southern Vista as well as the businesses around Palomar Airport as we really wanted to focus on the lunchtime catering/delivery business. It was also near the brand-new housing of Carlsbad, Rancho Carrillo area as well as San Elijo Hills in San Marcos.

I focused on building the catering business, while my wife, Sheri reached out to the schools and local community to develop our residential side of the business. This all was a perfect fit for what we were trying to do.

As far as the menu, I basically took what I learned at Leucadia Pizzeria, and added my own touch to it, focusing on a good quality pizza as well as a variety of pasta entrees and salads and a few baked subs, including the iconic Pizza Sub that you introduced me to from Peppino’s Pizza in Allendale, Michigan. We really scored with our lasagna and the Philly cheesesteak sandwich.

LTP: Describe the last 20 years there.

Jim: The first seven years were amazing. We established ourselves in the community as a family-owned, neighborhood pizza shop. But in late 2008, the bottom fell out. Melrose Road was finally completed, so we were then bypassed by a lot of traffic, and several new pizza places opened up in our area. It was the first time we had serious competition. Then came the great recession.

All of these things nearly put us out of business. But we survived it with a little creativity and some long hours. It really was a low point for us that lasted several years.  We survived the recession, and slowly regained our lost business.

In 2015 through 2019 we saw modest growth and things were really looking up. Then COVID-19 happened. That was the knock-out punch for us. The restrictions and the resulting drop in sales were too much. Most restaurants survive week to week and sometimes day-to-day.

Today’s sales will pay for tomorrow’s payroll and bills. A busy stretch can keep your head above water, but a long slow one can kill you. I knew we wouldn’t survive, so around March of last year, I started to develop my exit plan and begin a new life. We closed for good on December 31, 2020. Good riddance to an awful year!

LTP: What’s next and how does it feel not being in the business?

Jim: Life after Palomar Pizza is definitely different. I am back in school earning my teaching credential through CSUSM and in the meantime, I got a new job at one of my former big catering clients, N.A.I. in Vista.

The business relationships I had developed with our catering clients really paid off when I found myself needing a job for the first time in over three decades. I am happy to be there as now I have excellent health insurance for my family, paid time off, and just yesterday I was handed my first paycheck, the first one in over 20 years! Being out of the restaurant business feels like a huge weight has been lifted off my shoulders. I now have structure. Life now is much less stressful. Now I have peace, and peace of mind!